88 People in my Vibrating Chair 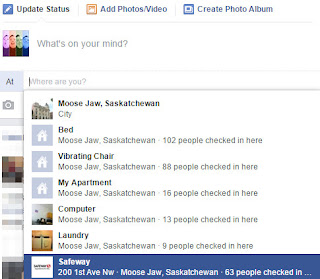 So according to Facebook 102 people have been in my bed, 88 in my Vibrating Chair, 16 in my Apartment, 13 at my Computer, 9 in the Laundry Room and only 63 at Safeway. So you are going to check into Safeway and see Vibrating Chair and check into that instead? LOL. Can't imagine 87 other people in this aria with one. Not many people with money around here and the internet. I say that because there are a bunch of older folks who are not connected around here. 102 must have a bed though, so that explains that one. I figure more than 16 have an apartment as there are 24 of them in my building and only 2 don't have internet. BTW took me a while to get the WiFi set to a channel that was not used. The computer is obvious being how many have WiFi and the Laundry, well everyone needs to do that now and then. But what is with the Vibrating Chair? I'm confused... At half price this thing was $600. So I can't see many people having one. So it must just be a "hay look at that" kind of thing. 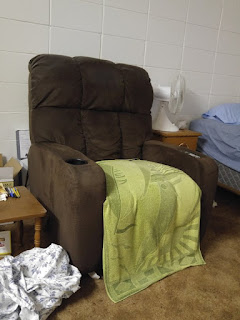 You don't even want to know why I have the towel down BTW, so don't ask... HEHEHE... Check out the I'm too lazy to move it pile of bedding on the floor. Woot - I'm organized don't ya know. BTW it has speakers and an audio input and you can set it to vibrate to the base beats on your iPod or cell phone. Oooo... Bet no one else around here has that on their vibrating chair. LOL.