First thing I noticed is I had to wait to log on. Was only 3 minutes but was seriously not expecting that to happen.

The second thing is they only recorded my first dose, not my second one. After talking in a local group on FB, it seems a lot of people have this issue. After seeing posts on Reddit, I realize it's a heck of a problem all over Saskatchewan.

As you see my card they gave me (redacted) has both on it. So I had to take a photo of the card and fill out a form and send it into Sask-Health.

I find it interesting that my two friends refuse to make an online account to get the QR code. They are willing to pay $20 to get one mailed to them. The thing is, they don't know if their account is messed up like a lot of people and they will be denied entry to places because of it. They say to keep the card just in case to show people. Might get it laminated.

Online it shows only the first. 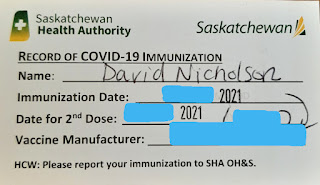 The card they originally gave me.