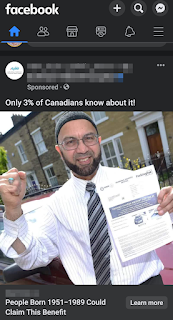 Facebook scam ad. All I'm seeing right now is scams and literal pornography. Just WTF Facebook? And it's been going on for a week now.

This one is claiming there is some benefit from the government you can get if you are in my age range. The thing here is they will claim you need to pay them to get it, because if you apply on your own, you won't get it. The fact that there is literally no name of this benefit, so you can't go look it up, is not slowing people down from handing them their money. Sigh. It's not real and you are a sucker for falling for this.

Some of them are claiming you can get up to $100,000 from the government on this one, but this one is fare more vague.

Lets look at this photo shall we? It's from a news article in the UK where a man is complaining he was given a parking fee of £65 when he was not actually parked in the place the bill says he was. You can LITERALLY see what he is holding in the photo and that is has F-All to do with the Government of Canada an some hidden benefit.

Other ads are claiming "25 ways to rid your lungs of COPD". Sorry, you are not going to drink some magic potion off the web, and get rid of something that will eventually kill you. Sigh, but people WILL click these things.

Another is a sure fire cure for type 2 diabetes. Good luck with that one as well, and if they want money, make sure to give them a credit card number so you can be scammed out of all your freaking money.

A great deal of them are from things saying that a Canadian icon has met a "tragic end". All you have to do if google this shit. You will see, there is no credible source for this crap. Yet people are clicking the hell out of it. And if you end up with ransom ware on your device, make sure to remember how STUPID it was to click this crap.

Another one is an ultra right wing group linked to literal White Power organizations calling for the overthrow of the government FFS. My GOD, this is literally not legal and here it is. I'm also willing to bet there will be not one dang thing legally happening to said organization for doing this. After all, they got away with it after causing about 1.5 billion dollars of loss to the economy. So I'm kind of sure this will not meat in legal action.

If I could get all my friends or at least most of them to switch to MeWe, I'd never look back on Facebook again. I'd be so long gone from this platform it would not be funny. But  I stay and put up with literally CRAP to engage with my friends. I care about these people like they where family and I'm not just going to abandon them.