We Choose How We React 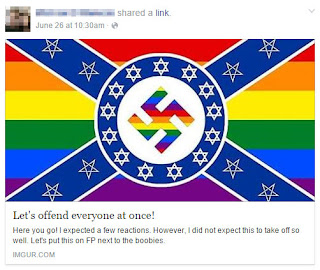 The self same person who posted this on his wall went off and off about how it's offensive to have someone say "I'll pray for you". The theory here being that it's a useless act and you are doing nothing to help the person. Since when is compassion a useless act? You are showing your concern for the person at a time when you can't actually do anything for them. Who would not say a comforting word or encouragement to a child fighting cancer for example? You are not actually doing anything to "help them", so it must then be a useless act and you should just let the child suffer alone with his or her fears. That would be if you followed this persons logic.

The fact is, those with no religion follow two camps. The non believers and the atheists. A no believer will just smile and say "no thanks" when you offer a prayer. The atheist on the other hand will take the opportunity to become over the top butt-hurt over it all and freak the hell out on your ass. It is amazing that people who spend most of their time posting stuff on their timeline about how "stupid religion is", are so easy to offend. But yet they are. This is not uncommon though, most people who are ready to shout it from the mountain top how wrong the rest of the world is, are offended at any sign that you do not follow their path to the letter.

This same person took my words in a friends post and twisted what I was saying. Literally he was saying I said something I did not say and claimed "I am sure you think your right". LOL - the only one claiming to have the answers in this thread was this fellow and no one else. I was not thinking and for some reason though, "maybe he just did not understand". So I explained it in a different manner. Well then out came the long rant about how I can't understand what it is to be offended. After all, being disabled for 16 years of my life and being 427 lbs - I can't possibly have ever been offended by what someone said to me.

The thing is, I chose to react differently. I don't do off and rant and rail about how offensive the comment about how fat I am is. I don't go off on people who constantly seem to need to ask me "what do you do for a living?" Instead I just quietly know that they don't understand and I move on. We do not need to be forced into the world of conformity that this group would have us follow. What we do need is compassion for all people. We also need to realize that others don't think like we do and will follow a belief system or not depending on their choices. For me there is a God out there, but I do NOT desire to beat anyone over the head with what I think. I also am certain in my mind that you do not need to follow a God of any kind to move on to the next life. To me it's all good and I celebrate how different most people I know are from me. I don't want them to become like me. I want them to enrich my life and they do.