I almost have my keys back 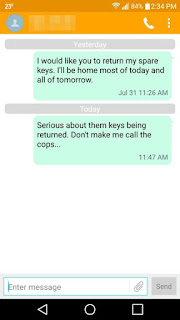 Well what can I say. I almost got them back. A friend has them and I'll be getting them back sooner or later. But this was one sad state of affairs I tell ya. That and he went threw a mutual friend rather than give them to me face to face. That kind of says a lot as well. The big shame being I was well willing to forgive his behaviour until the time I saw all the rabid posts about me on his Facebook. Man to say things like that after someone was there for you for 35 years of your life. I get it that he is mad at something else and might not even know what it is he is mad at; but I just won't put up with that kind of stuff. It's a shame we had a lot of good times and so on. But in the end he was literally never there for me without complaining his ass off about it first and for days after. He was never one to listen to my troubles or my pain. So after all that time of this one sided thing we had - It is best to just say never again. 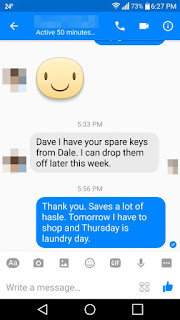