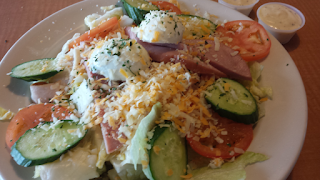 Chefs salad at Smitty's on the highway here in Moose Jaw. OK this was hellish good, but it's the size of my head LOL. I am used to having the meat cut up smaller as well so I had to use a knife on it. The eggs where not pealed right. There is a trick to that a LOT of people don't know. Toss them in ice cold water and let them cool then roll them on the counter to crack them. They will then peal right off with no sticking to the egg. If it's done long enough this will work. Don't do it with soft boiled eggs you will be sorry LOL. But I digress. The salad was very tasty and fresh and yummy. But I had to take some home. Perhaps I should have looked to see if there was a "light size" in the light and seniors menu. Give this 7.5/10 - would eat again :) 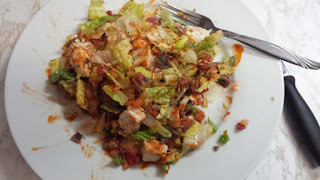 I had the Santa Fe salad on another day and it ROCKED. But the chicken was not cut all the way threw and once again I went looking for the knife. There really is no excuse for that. Cut it right and lay it out nice on top. Then the customer is happy :) It was also cut the long way instead of the thin way. This made the pieces too long to stuff in your mouth. Just rotate and cut threw. Nice small pieces that way. Tasty as hell though. There literally is one dressing for this type of salad and that is spicy Italian. It is what goes with it. So when I was asked what dressing I wanted, I was a bit confused. But the girl more than likely had no idea about this. Not everyone is a cook in a past life like I was. What sets this puppy off is the bits of corn chips you put in it. Now MOST places get the fixings shipped in in a pale. This is always a disappointment, as they are too small. But in a busy place it's hard to get someone to cut up a shit pile of veggies in a short amount of time. This is NOT a high class joint after all, it's a truck stop. So no lost points there. But the chicken not cut right is a bother. Tasted flipping awesome though. 8/10 - would eat again. Would have been 9 if the chicken was cut right. The LOL here is I know people who would have sent it back over that. Just grab the knife and CUT you lazy bums LOL.

As for the service out there, it's dramatically improved since we complained about it online to the manager. Hell try and let your coffee get empty. Well OK mine does but the others don't LOL. I am freak about my coffee. I drink that stuff right now like. They are always happy to get my friend a fresh pot of water for his tea and they know us now and know he only wants 1 and I want 2 refiles and no more. The thing about being predicable is they DO get used to it LOL. So on the strange time that I want 3 refiles, I have to flag them down as they don't bother with us after cup #3. They are always pleasant to deal with as well. But I have been left standing a bit long at the till several times. So I rate the staff 8.5/10 - they ROCK.

Now the only real complaint is... The coffee is not consistent. So they have the packets come in and they just open then and put them in the filters. So this is NOT their fault, but the suppliers. Being that most chains tell you who the hell to order from, they might not have a choice. But if they do I would LOVE to have them switch brands. Blue Mountain Blend would be the perfect thing for them. Most people like me love that stuff. And I AM the average consumer out there. They are mostly like me.

Now for a LOL - I read a review the other day that said, "we came in and sat down and after 45 minutes of no service we left". HA! I know exactly what you did BINKY... You and your family just went right past the sign that say "wait to be seated" and went to the BACK. See the back is used only when it's busy out there. So if you sneak past the staff and sit there, they have not one clue you are there. This is your fault dumb ass. Like most very bad reviews, it sparks from
someone being butthurt after doing something stupid or being over the top fussy and literally nothing will make you happy.

In any event. If you are heading to Moose Jaw or just passing by and need a rest stop, I recommend this place. It's on the North Service road and all though the parking lot if marked in a strange way, there is lots of parking. Enjoy - Dave :)
food fun good moose jaw