HOW SINGLE MALT FUCKED UP MY MONEY SUPPLY 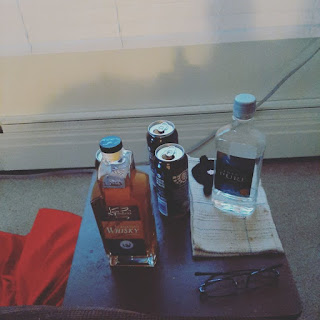 This is me being bad on a Friday night and then fucking myself over for money. I spent $65 total on the single malt (amber stuff) and $17 on the stout beer. The vodka was leftover from the week before and almost empty.

I had forgotten I had 2 expenses coming up in the next few days and I spent money on fun when I did not really have it to spend. I ended up after the 2 things I needed to pay out for with only $12 for the rest of the month. It was an OH SHIT moment.

Fortunately I had a couple people send a few bucks on PayPal so now I have at least coffee and chip money for the rest of the month and I can drop an extra $20 on my outstanding Cable bill - then in October I get the GST rebate of $180 and that will pay off the rest of the bill, and I'll be back to normal money wise I hope.

I have paid off the outstanding amount on the credit card that I had left over so that's all good. I have a limit of $500 on the card. After bills and rent I have $381.78 to spend on the rest of life. Being I had the card maxed out there was the matter of not being able to pay it all off the next month but that's sorted.

I have been trying to get back to the point where I can pay off the card as I spend the money, but I don't honestly think I'll ever be there. I'd need a good extra $500 to do that and this will never happen. The sad thing is, friends helped me get to that point before with donations and then a couple of disasters happened and POOF back to being in the hole every month.

I did get a lotto Max ticket for the first time in a long time as it's a great deal of money. I know there is almost no chance of winning, but oh well. If I did I could help out my friends in town as well as get into a house of my own and have a good rest of my life - it's that much money. But that is just a hope and a dream, the reality is it's more possible to be hit by lightning that win the lotto max.