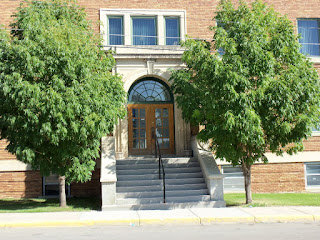 In my time this was the nurses entrance to the Moose Jaw Union Hospital. The building was demolished in 2016 and is now a lot of vacant land. The new hospital is out on the highway and really does not have the character of the old place.

BTW, before my time, this was the entry to the hospital and the newer wing where most of the stuff happened was not built yet. There was also a hospital on South Hill, but I have no photos of it, just when it was being demolished.

Can't say that I have fond memories of the place. The only times I was there, it was not a good thing. I was either visiting a person I cared about or was hurt, having tests or locked up for being mentally ill.

Have to say, although the new hospital is out on the edge of the city, at least there is enough parking for it. The old one had no parking for patients and you had to park on the street and walk a couple blocks or more, but the new building is literally ugly as sin.