MY HERNIA - AKA UNHEALTHY LIVING MESSED ME UP 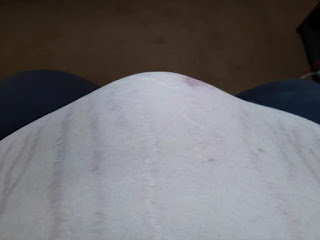 This is my intestines coming out threw the stomach muscles. I have an incisional hernia. It started out as scar tissue on the muscle after my gallbladder was removed. Years later I woke up to an incredible pain and ended up passing out on the kitchen floor then calling 911. That was the start of it and was small at the time. I needed surgery that same day, as a small hernia can kill you (not a big one).

The fix lasted a year more or less then let go and I had to get it fixed again. This time it was bigger but not this size. It was a short operation and but I was left in the worse pain of my life. It was level 10 for 3 days.

The gave me the strongest pain meds you can get. It did nothing at all, besides plug up my pooper. It was a horror show all the way. First I could not pee, and had to get my friend to take me to the ER to get drained. The nurse was unable to get the catheter in my bladder. It was not my prostate being at issue, but her inability to do it for some reason. Another nurse came in and in it went with no problem at all. They ended up draining almost 30 OZ of fluid out of me - no wonder it hurt. So shift change and a third nurse comes in to take it out and clean me up. So I ended up having little Dave handled by 3 different nurses that day. Good thing I don't care at all if I'm seen naked.

Cut to day 3. I am still in level 10 pain, but I have not pooped and it's backed up badly. So I go in and the doctor shoves a finder in my ass and says "yup, it's hard as a rock". He shows me 2 suppositories' the size of my thumb and said he's putting them in there. It was not pleasant. He tells me "it will feel like you need to go, but hold it for 30 minutes". Well I had never felt the urge to poop more in my life. I watched the clock for 30 minutes and filled the toilet. I have never seen so much poop come out of me.

For another 2 days the pain tapered off until it was gone. But I was left to dress myself after the operation and had no help. I was delirious with pain and it was a danger to me to dress myself in that state. I complained that I was left like that and the reply was "you should have pressed the buzzer". Well I'm in a state where I had no idea the buzzer was there. Groggy from being knocked out and out of my mind with pain, so how does that work?

Well then it was all for nothing as about 3 months later I am cooking soup and rip it comes loose again and now it's the size you see in the photo (the size of a grapefruit). I go to the surgeon and he tells me there is a 75% chance of failure if he does the best fix they can - because of my size. He then tells me the operation will take over 5 hours and because of my heart condition and my size, there is a 20% chance I'll die, or be left worse than dead.

Well we both come to the understanding that, I guess I live with it for the rest of my life. To be honest he told me there is almost no chance of it causing a health risk when it's this size - it won't get pinched and die for example. The other factor is there is literally no pain from it most of the time. Maybe every 2 months I get a couple hours of mild pain in the one spot, but that's it. So why risk death or bran damage to fix it?

So here I sit with this alien coming out of my belly. People seem to notice it as the have good look at the lump, but literally one person has asked what it was and no one else. BTW the friend that took me in was a woman and sat with me in the ER the entire time. She looked away when the catheter when in and was removed - but other then that, she sat with me and comforted me.

So what can I say in conclusion? Well decades of eating crappy food is to blame for this. First this would never have happened if I did not need my gallbladder removed and that was from a diet of crappy food. The other thing is, the food left me in the state I'm in now, that being very large. At my worst I topped 500 lbs. I'm in the 390 range now. So yeah, not living healthy has it's price in the future. You pay for it later. For me, I payed for it big time in many ways. Peace and well wishes to you.