Ordered Stuff on Amazon and Made a Money Oops 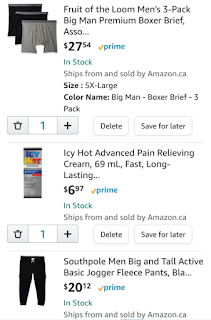 Was not going to be out of my hole for a wile yet, but was given enough money to do that. Thus I ordered some clothing. There are 3 pair of sweat pants coming and 1 3 pack of undies. I have never had this kind of undies, but if they fit well, I'll order 2 more packs next month. Might order another sweat pants as well. I also ordered the printer I need.

I messed up thinking I had money though. I ordered a second set of groceries (mostly veggies) at the price of about $50. Then I realized that none of my subscriptions had come in yet and I needed $53 for them. So now I have like $53 less than I planned.

I got rid of an addon to prime that I'm not using (Shudder) - I tend to disable it for 6 months then turn it back on for a month or 2 to watch what is new, as they don't have an extensive library of movies.

I was looking at "Out TV" as an addon, but I just can't find content on it that is worth watching. The movies for the most part are not good and the shows are 95% contest shows that I don't like. So I'll skip it and save the $4 a month or so it would be. When the preview is done, it's done.

On a positive note, I should be able to take off a few LBS as I won't be able to get pizze, ice cream, or booze for an entire month. So there is that.