I Was Such A Fool For 35 Long Years

Recently unfriended a person I was very close to for 35 long years of my life. I treated him like family. When he needed someone to talk to I was always there. Now after seeing his true face, how can I ever have even the least bit of respect for this person ever again? It's gone and there is a deep hole in my heart where that love of a friend used to be. I am an all or nothing kind of person. If I care for them, I give every last bit of myself to them.

These shots where taken after I was told how he was talking about me. This is a person who always claimed to be a good person with high standards. 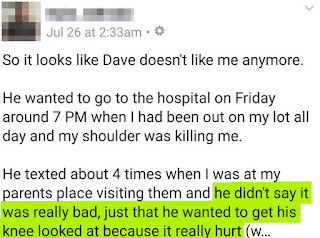 I should have known when I needed to talk and he would change the subject. This after many times of listening to his problems and offering what advice I had and giving sympathy.

Somehow I thought I could go on and at least be decent to him when I saw him someplace and maybe chat a little. But it is very clear that all he is interested in is being hurtful and finding fault. So I hope he enjoys a good laugh or two at my experience, as so many others have in the past. The fact that in school he was the victim of bullies seems to have taught him nothing at all.

P.S. I don't know if people can't understand chronic pain or they refuse to. All I know is that almost no one who has not lived this hell gets it. Also the mental illness I have keeps me from being able to work a real job. I can suffer the pain to get any task done, but I can't hold back what happens to my mind when I am under the pressure of a job. It's something that I can't overcome, something only those who suffer the demons I have suffered can know.

Final Thought: I can't unsee who you really are. I was willing to forgive till I saw it with my own eyes. I still forgive you, because I know people like you do this out of the pain you have inside you. But I can't trust you.