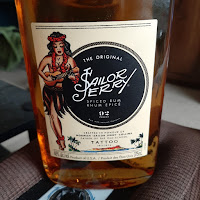 Well this was a tasty treat. Normally it causes me to flair a bit if I drink it, but I got away with it this time. I've got to get back in the groove and eat right and NOT drink booze for some time to come. I've gained 50 lbs in the last 4 or 5 months and this needs to be fixed. So way less junk food, no pizza and no booze for a while. Maybe once a month I'll get into a small bottle of something or have a pizza, but other then that I need to have resolve.
I'm almost at 400 lbs again and this just CAN'T happen. My scale only goes to 400, so if I get bigger then that I literally won't know how heavy I am until I drop a few. The last jump was 10.2 lbs. This is just not good at all.
I know I'm carrying some water weight - when I walk my knees feel a certain way when I'm full of fluid, so I can tell. That being said, It's by far not all water weight - I have been terrible last week with the crap I been eating.
The other thing is I will have maxed out my dang card soon if I don't stop getting stuff I don't need. I have more than enough to get my food in, but DANG I been bad with the money this last month or two as well.
In general I need to just start being good and stop having fun for no reason. Yes we all deserve a treat and you only live once and life is short - but you also need to be responsible for your actions and not mess up your life.
For a week or two I'm going to try and eat just twice a day and see if I don't get feeling bad, I'll keep it up and see if that helps. I portion out my meals in advance and just nuke them up in the microwave. I won't be getting canned beans, so the salt intake will be down a lot and I'll be saving a bit of money - well $50 on average a month - by using dried beans. Yes they are a pain in the butt, but heck they are a lot less money and no salt.
Next month I need some new containers for food. I'm getting a 4 pack of 1 L containers this month with my groceries. I'll be stuffing the big bag of lentils I received into the containers. Next month I need more food containers.
It's not all being bad that has me so much on the card. I needed some things I don't normally get and had to order them and for 2 months was WAY behind in being able to pay off the card the next payday, so there was carry over. It's not been a good few months in general for being able to not spend. That combined with too much fun has left me kind of toast.
Anyways, lets see if I have the resolve to stick to the plan this time. In the past I have not. I know I can do this if I really push myself but dang it's dull not having anything in your life other than watching TV and playing on the internet. Oh well - I'll try my best.