August 08, 2021
Have you noticed that there has been a wild jump in the amount of scams going around on Facebook and in spam emails? 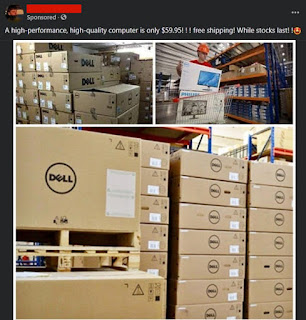 This is so obviously a scam. There is just no way you are getting a new in the box Dell for $59.95 shipped. Just not going to happen. They would be spending more money to ship it to you than they make off of you. Even if they got them for FREE, this would not make sense. 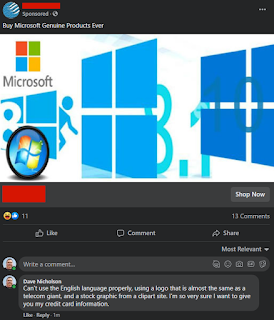 First clue is they cannot use English properly. Second clue, the logo is almost the same as the original AT&T logo. Third, it's a stock clipart image from a free site that has been cropped to hide the watermark. The vast majority of licensed resellers would also have a recognizable company name like "Staples" for example.

He is the thing, I live in Canada. This one is a double hit. First it tells you someone wants to give you half a million dollars. Then it says it's some kind of security risk to the USA and if you do not provide all your personal data, they will come and arrest you. See, the FBI can get your personal data, they don't need you to EMAIL it to them. The did not even know my dang name, it's not used once. There is no way in hell for foreign dignitary is wondering the streets looking for you to give you money and somehow the FBI took him in for questioning. Does this make sense to you? And to reiterate, I'm in Canada, the FBI is not going to cross the boarder and arrest me FFS.