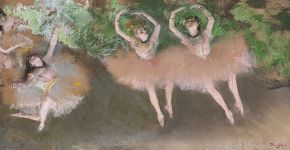 Edgar Degas painted "Ballet Scene" in about 1879. I always like it in it's almost primitive form. It shows the spirit of the dance, not an accurate image of the dance. If you know what I mean. But I remember it from another place as well. The Usenet groups. There was one for Paint Shop Pro and a lot of digital painting was going on in the group. See the thing is, if you used a photo source that was not yours - then you gave the credits to the crater of the photo with the painting of it. Most of the time it was images that where done from scratch though. There where many people who where extremely good at going these from scratch. I most of the time did the paint over method, where you created a scripted brush then used it on a layer over the image to "trace" it in a painting like style. I at the time was not good enough to do things from scratch and never really got great at it. But to get back to this image. It showed up in the group by a man who claimed to have created it. He said it was his content. When asked, he stated that it was "his and his alone". The image not even being reworked at all. He had just expanded the image he got off the web and posted it. You could see the tell tale signs of doing that. When you blew up an image in them days it left "marks" that you could tell it was blown up. Now to a point, you can use intelligent algorithms blow up the image with almost no quality loss. But not then. So he was earned the name "Smudgy" - You see is you used the "smudge tool to remove the signature, it would leave behind marks that where tell tale. Once again they where there in the lower right corner. Here is the best part. He found a photo of someone reproducing this smi-famous image on a stage with real dancers then did a "paint over" and once again said it was his. Claiming it was a different version of the same "idea". Well someone found the image and posted it and a link to the web page it was from. He was not dissuaded and claimed that it was his work all the way. See the first one was outright theft, the second one would have been acceptable to most of the people in the group if he had just given credit to the owner of the original photo.

I am also reminded of a challenge in the same group where 4 photos that had very little to do with each other where posted and we where challenged to use elements from all of them in one image. That was always good fun as well. But that is another story.