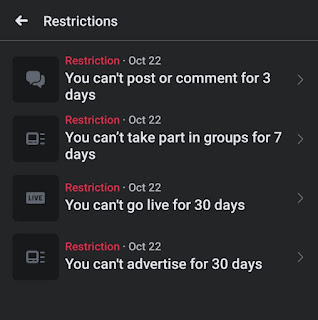 My latest Facebook spanking. I posted a MEME with a photo from the 1950s of a child about to stick a metal butter knife into an electrical outlet. The caption, "But my rights! You can't tell me what to do". An obvious reference to people who don't want to get vaxxed to literally save their lives or to wear a mask to protect themselves and others. Fecking FB comes out with "this is a dangerous image that can cause people to harm themselves or commit suicide". To me honest, I don't know how many people in all of time thought "I'm going to kill myself" and stuffed a butter knife in an outlet. Also to be honest, if a person looks at that and things "well I want to die now", they where looking for an excuse. This is like the fecked up 1980's with "video games and rock music is causing people to be violent". Even the radical morons realized sooner or later, that people who have a vilent nature are looking for an excuse to do harm, and they would do it sooner or later no matter what - the news could trigger them. I'm so tired of almost everyone I know getting a timeout in the corner every time FB thinks someone might be triggered by comedy. Ya know, I have seem acts that make me think "this guy is a hate filled twat that has no redeeming qualities and I'm full on offended", yet I never screamed "stop him right now, I'm butt-hurt".