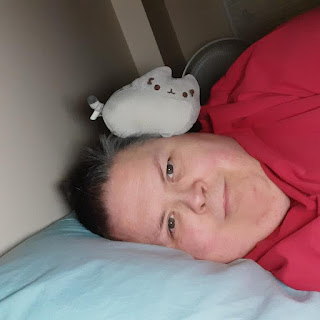 It's digital clean up day. I'm sorting my new photos and some text documents out on the PC right now - well I'll finish when I'm done this.

I was sparked to look at the 5300 posts on Deviant art. There where several with religious connotations and being I'm far from religious these days, they are gone now. There where also a bunch of NSFW images I removed. Also getting the axe where a bunch of selfies and a pile of "digital paintings" that kind of sucked. I went through a second time and deleted several Bryce 3D renders that I just no longer like. In all I remover a couple hundred posts I think.

I made a journal entry on DA today saying I blocked someone for the first time. Well I looked in my settings and NOPE, this one was the 2nd. I remember now the other guy was rather aggressive in going on like a mad man "you are copying my style". If I remember correctly he had very little work posted and was not very related to what I was doing, so who the hell knows.

This second person said I was "reproducing his work". I found that interesting as some of "his work" was an exact reproduction of a JWildfire flame fractal that exists from an Android App that has 100 example files. At least 4 of his works that I could see where 100% the same - so yeah, rag on about other people hay. Did not bother to look into any of his other stuff, just the ones I recognized. I have to wonder if any of his content was his own at all. But he was on about "remove them or else". Literally had no idea what posts he was on about but there was no posts of mine the same as his. When I asked him to give me the names of the posts or links - he went on about "do your own work" and of course no links or post names at all (what a shock). He added some rant about not joining his group. I'm figuring that may be most of his issue, that and what ever is wrong with him.

In any event, I was at least sparked to go threw my old stuff while I was at it.

On another site, I removed my account - I have had things posted there for years and not one comment or like or anything at all - so why bother. To be fare, I had not posted since last year. That was Red Bubble. This is the 2nd time I quit the site and in retrospect, I don't know why I bothered a 2nd time.

Speaking of groups, I went threw the Facebook groups I was in and dropped out of 3 of them. There is no activity that I'm enjoying in them, so again, why bother. I've noticed that several pages I used to follow have vanished on FB as well.

Well back to the pile of word documents I have in my 2 sort folder.