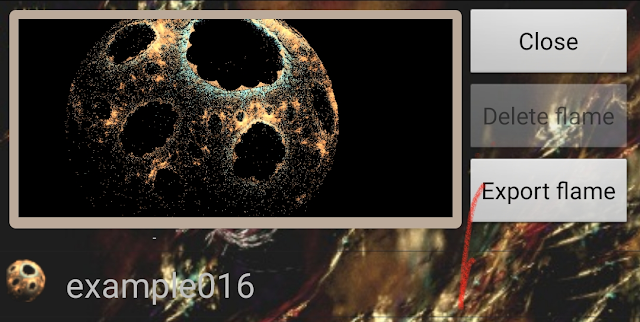 Just had an interesting thing happen on Devient art. A fellow claimed I was copying his JWildfire fractals. I tend to randomly generate them in the PC app and save the ones I like to play with later. Here's the ticket, there is an app for Android called JWildfire Mini - the screenshot above it from the app and shows "Example016" from the app. This is 100% the same as one of "his" works. He did not even bother to mutate it or change the colors. I looked threw the app and it seems not one of "his works" is actually his.

To be fair I've seen people say the app only mutates the samples and does not actually randomly generate the flames. People who use the app tend to send the flame file to the PC to render in way better quality, as the app is highly limited in resolution and quality.

There are a number of "scripts" one can use in the PC application to make an image as well as just the random feature. The making of a fractal in the PC app is very complicated and this is why most of us just hit the random feature and hope for the best. I've seen some very amazing work from this app and I am in awe of people who can actually do it from scratch and not randomly like most of us.

Several people I know also generate several random flames then combine them in Photoshop to create an image, some of the results are spectacular.

But yeah, don't call people out unless they won't find out that you are ripping off the samples and calling it 100% your work LOL.

There is another fellow I ran into that does work with "Mandelbulb 3D". He has not once created anything on his own and does not credit the person he got the parameter from. He does however want you to credit him if you use the parameter as a starting point. Go figure. When I do a tweak of a Mandelbulb 3D I always include a link to the one I'm tweaking, it's the right thing to do. 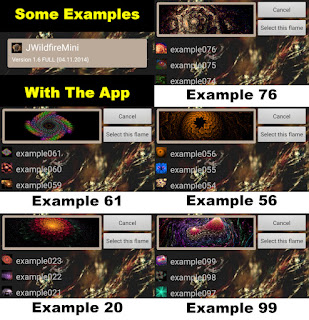 These are also ones he called "his work". Little to no effort to change any of it like you are supposed to. They are starting points and you mutate them to see what you can come up with. There are a lot of "sample parameters" out there for JWildfire you can download. The idea is to alter them in the editor or mutate them at least. It's how you learn the program. It is rather complex however and most people, like me use the random function then tinker with it.