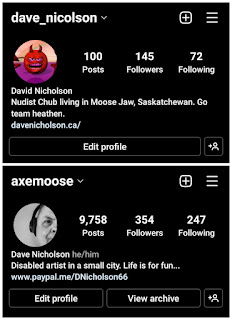 So, the bottom one is my main account. The top one is not that old, and it's my "Chub" account. I find it interesting how many times I get some model looking woman (scam account) following with literally 1 photo posted 4 days ago and following 5000 others LOL. Man if these bots had any intelligence, they would notice I'm following only over sized gay men on that one LOL. But not a clue they will ever have and blocked they will be. The other thing is, just like my nudism blog, I'm 110% sure a couple of people why make it their entire life to follow my every move, are not only seeing every post, but saving them to wank too later LOL. Y'know Ya Wanna! Anyways, just think it's funny how often it happens.

On Twitter I have it in my profile I'm a nudist and I sometimes post nude photos of myself. Most of it's followers are people I actually know, and a few other "nudists". So when you get once again, a model looking woman following 5000 other men, you kind of know it's a scam.

Got to think they would get more interest in their shady business if they pretended to be an average woman instead, and yes I've had a couple just like that DM me will all kinds of nonsense. It seems some days, that 30% of my online interactions are people trying to scam me.

Another one I keep getting is that I won money or a gift card. It's always from some store that literally has not one store in Canada, but I won LOL. Yuppers criminals are all over the place. Not to point fingers, but it seems the shady texts, DM's and emails seem to have stepped WAY up since we started to fund the Ukraine with their efforts to rid themselves of the Russian invaders (who are killing a great deal of civilians at the order of the politicians back home). Also a check of my firewall seems to indicate that instead of 90% of the attacks on it coming from China, they are now coming from the USSR... I mean Russia.