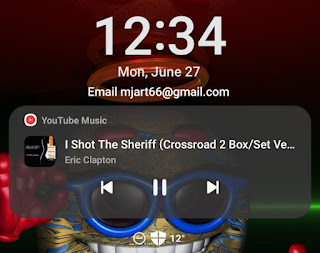 Was in terrible pain last night and listening to music on the headphones and checked the time "12:34" so I screenshot that puppy. I Shot The Sheriff was playing at the time. In the background you see some of my art.

So I went to the ER and spent about 4 hours in the waiting room as they where slammed when I got there. When I got in I was looked at for an hour and a half and sent home with a prescription for medication I can't afford.

I find it interesting that if it's NOT narcotics, then they are NOT covered (pain meds). Yet every last time they gave me a scrip for narcotics, it was covered no problem. Sigh. Even if I told them I'd rather not have narcotics. Got to wonder how there started to be a big problem with people addicted to pain meds eh?

Yup for 3 days of pain meds it would have been just over $58. Like holly cow man! So I just told them "I can't afford it" and walked out. So I'm still in hellish pain, but that is life. The only way to get any relief seems to be for me to shell out a pile of money. I will have some money on Friday, but I hope by then I won't need the pain meds at all. It's not as bad as it was yesterday, so I'm hoping I will be much better by then. Probably not, but I'm hoping.

I love how I mentioned this is the 3rd time I had this happen in 3 years and not once did the doctor think to send me for a CT scan. He relied on ones from over 2 years ago. You have to know there is a 5cm cyst on my right kidney by the way. I keep saying I think it's that cyst, but they literally never think it is. Here is the kicker, another person I know was getting the hellish pain in the same location and they removed her cyst and all the sudden the pain stopped showing up. Got to wonder hay? But here in the sticks, they don't connect the 2 things at all.

To be honest though, I think it not too likely they would operate even if they realized it was they cyst. I have heart failure (that's being treated nicely) and am a very large and out of shape person. There is literally around a 25% chance I'll die if they operate on me. The only reason they did the one time was because it was life threatening at the time.

So here I sit in pain and with no hope of having the extra money for pain meds. Even when I have the cash, it is almost all allocated to things I need, like clothing and clearing debts. I don't really want to end up back in the hole after working hard not to be. So I'm going to suck it up and just live with it.

By the way, I live in pain all the time, as in constantly. So extra is just another brick on the pile for me. I find it interesting that if the people I know who don't handle pain even slightly, went in, I know for a fact they would have been given industrial pain meds for a week. How do I know? It's happened over and over. All when they where in pain that I would equate to what I deal with every day.

A good example is I had dental surgery, and they gave me a scrip for narcotics and I was like "pfff as if" and never got them. The pain was no worse than I was feeling all over my body and at the time I was taking care of my Mother and myself.

Now why do I not really want narcotics? Well, there are 2 reasons, first, I had a brother who killed himself after 20 years of being addicted to pain meds and booze. Second, they do SHIT for me. Honest to God, the first dose kills the pain, the second not so much and by the end of day 2, they do nothing at all. I get used to them very fast, so who do them, and they are risky to take.

In any event, there will be no time in my future where I'll get pain relief from a doctor in Moose Jaw for one of the 2 reasons that should now be obvious, but I'll tell them anyway. I can't afford the stuff that is not covered, and the dangerous stuff that is covered is trash and does nothing for me. So I'm doomed to live life in hell. OK I have a really good life, so I retract the hell part, but I will be in pain.