Why I'm Using Microsoft Defender on All My Devices 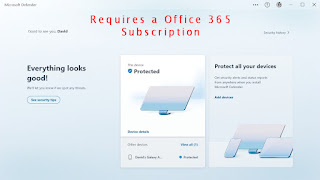 I've had an office 365 subscription for many years now. To be honest I use Google Docs 30X more than word, but I got it for the 1TB of cloud storage. It's a source I trust and I don't need anything on my PC that is extra, it just does it for me. On my phone the OneDrive app is a bit flaky but it will do I guess.

Microsoft Defender is the "level up" from Windows Defender that comes with windows 10 and 11. This is something you can install from the app store on your PC, Android device, or iOS device. You can protect all your devices with the same virus protection and you can even share your security status with family members if you desire.

This is no extra charge, it is just an addon to Office 365 subscriptions. So far I'm liking it, however on the phone I do NOT like having the only access to it, in my notification bar. I would like to not have the icon showing 24/7 on the phone and instead be totally in the background and if I want to interact, click an icon in my apps drawer instead. I've already got enough stuff showing in the dang bar.

It has browser integration as well. On your Android device, it just wedges itself into Chrome, so I was annoyed to find I needed to install an addon in Chrome on my PC to have it protected. Of course Edge is auto pretexted. I'm told there is an addon for Firefox as well. I understand that there is no protection for other browsers other than this on your PC.

I've seen a lot of people lose their minds over the announcement of this software in the media. It seems most people think that Defender is going totally pay and they are very upset at the thought of losing Windows Security. This is not the case, as I have stated this is a step up from the standard protection that comes with your office 365 subscription.

I was also annoyed to find that it did not auto install on my PC and I had to go get it from the Microsoft App store. It should literally just have a popup one day saying we are installing this and tell you it's trans-platform and you can install it on your other devices. But NOPE. If I did not see it in my feed one day a week ago, I'd not even know it existed and would never have installed it.

I've not put it on my Tablet, as I literally am using that thing as a book instead of a web device, so no real need for it. I may install it just because I can, but not right now. I like how fast the scan was on my phone as well. I've had other pro virus systems on the phone and none of them where this quick and a couple of them noticeably slowed my phone down.

My ISP has the option for $10 a month to have virus added to the PC, but to be honest, it's McAffee and the dang software slows my PC down a LOT. It also left a folder in my documents folder that I literally for the life of me can't get rid of and it's annoying as well. I ran the cleaning tool from McAfee and it still left it there. Sigh. It's not able to be removed no matter what. and lets face it, after tax the ISP option is $11.10. After tax Office 365 is $8.88 and I get the 1TB of storage instead of literally no cloud storage. This is a much better option.

If you look at pricing, this is a very good option in general, and you can trust it. God knows with names like "trusted antivirus", I have problems believing them, so I'm sticking to Microsoft. Hell there is one leading software out there that is more expensive and has literally been found to be spying on you, and yet people are still paying for it. I shake my head. And yes, I realize they literally all collect data on you.

In any event, I'd recommend Microsoft Defender on all your devices highly.