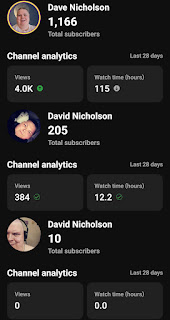 So I have 3 channels. One of them I only  ever post unlisted videos, then toss a link for a person to watch, then remove them after they see it. I think it's hilarious that that channel has 10 subscribers (OK 2 of them are dead people). One in the middle is my Tag video channel and no one really liked the tags on the main channel, so I made a different channel for them. The audience there is about the same every time. They same people interact with every last tag video. BTW a "tag video" is a question and answer video. You answer a list of questions basically. It's called a tag video because we used to tag others to do the same questions. I only really know of one person in my group of friends who tags anymore, but we still call them tags. The top one is my daily vlogging channel. I typically get around 50 views after a week or two of the video being up, then no more views. I've literally not looked at my statistics in almost 2 years, so I have no idea if the demographics are exactly the same, but back then most viewers where women over the age of 30. The bottom one has 0 views because some time after removing a video the views for it no longer count and are removed. The two active channels are linked in the links on this blog.