IT WAS THE LAST PAYPHONE IN THE CITY 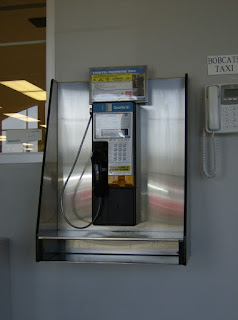 Photo is from 2008 and this was to the best of my knowledge the last pay phone in the city. They had removed all of them and this one in the Co-op was there for several months before it too was removed. It was $1 to make a phone call, so it was kind of ridiculous to say the least.

I often wonder if our age of mobile phones, are there people left out who now can not communicated if needed, because they have no mobile and there are no random pay phones. I do realize they where actually loosing money (or so they say), but is there still a need?

This being said, there are programs that give used phones with no sim card in them to homeless people so they can call 911 if needed. They just can't do anything else with it unless there is WiFi free some place.