GOT SICK, GOT EXTRA MONEY, SPENT A LOT, HAD FANCY FOOD AND DRINK 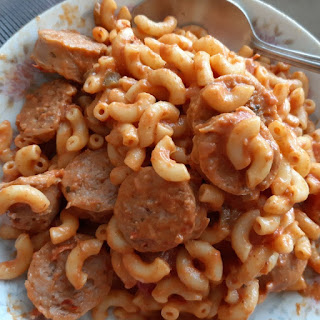 This is basically 2 boxes of Mac N Cheese with some salsa instead of milk to make the sauce and some hot Italian sausage cut up in it. It was one of the luxury foods I afforded myself this month. It made enough for 4 meals, so there was leftovers. It was of course spice as heck and I had a hell of a tummy ache that day. Strange thing is, it settled my tummy for a while.

I was sick with 8 of the Covid-19 symptoms for 3 days. I called the health line on day 2 and they told me to isolate for 48 hours longer than the symptoms persist. So by the time I got my test on day 4 I'd already felt better and had one day left to hide in my apartment.

I ordered my stuff in. I also ordered in food to eat (fast food) for 3 days as I was in so much pain I could not stand up to cook a meal. I had zero contact delivery of course.

So far I've not been phoned with the results at all, and I have the feeling they want me to log into that cursed system of theirs I'm refusing to finish making an account on. It's just too much of a pain in the ass and too complicated. I'm not an average user of the internet or commuters BTW, so if it's hard for me, think of someone who barely knows how to use the internet.

I also spent about $120 on booze to try this month. Being I had an extra $500 to play with, I felt it would be OK. If I knew I'd need to order delivery (take out) so often this week, I'd have skipped that.

Today I did the laundry and it just killed me. My knees where still bad from the day before so after doing the washing, I was in bad shape and barely made it back to my apartment. So once again I ordered in. Now I've got about $70 left on the card and $0 in the bank. The $0 is normal, I use it all to pay off my card when I get paid, that and rent and bills take 100% of my check.

But I've enjoyed a lot of tasty food and had some fun to say the least. I've also ordered several things I desire and have purchased 2 weeks extra food than normal to have a safety net incase I get stranded inside or something happens I can't shop right away at the end of the month.

Next month is GST month, so again extra money ($180.23) I've already got a few things I need for next month, so I should have some leftover money to play with. Might try some honey wine because of that. In any event, things did not go as planned, but it's all good.

P.S. there is an expense I'm not mentioning and will leave you guessing in the comments. One person will know if they end up reading this.