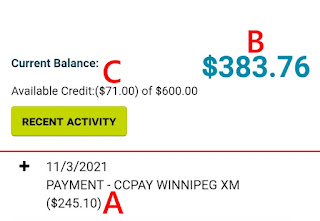 A is the payment I put on it when there was $71 over the limit. You can see, they know it was made and is listed. It was out of my bank and in theirs by the time I took the screen cap.

C Available credit is still $71 over the limit, so no going to the store for me.

I've not had this happen before, but evidently it does happen a LOT with some people. The explanation is "the payment did not post to the card yet". Well, how the hell did it know to change the amount that was left on the card, and NOT post to the dang credit card at the same time? This is B.S. The worst part is, I need stuff and it says this can last for a week or MORE. DANG. If it is not fixed tonight when the system does it's thing (about 5pm my time), then I'm flipping out on someone.

I called them this morning and they where of no use. The fellow on the other end of the line was talking extremely quiet, and with the worst accent I've had to deal with in my life. I swear to GOD he say the payment posted, but I'm not sure - by this time I was frustrated trying to understand him and he would NOT speak up.