Cowboy Bebop Season 1 Episode 8 "Sad Clown A-Go-Go" (the Netflix original that is), just made me cry. Yes real men do cry, it's good for you to feel emotions and to let out sadness.

When the villain Mad Pierrot, who is literally named after a seventeenth century sad clown, thought to be the first sad clown on the stage. The full name from the original Cowboy Bebop was named after a character in a famous French movie from 1965 (Pierrot Le Fou - or Pierrot the crazy one).

Well, what can I say, the villain was played so convincingly by Josh Randall, was fully and completely believable to me. His acting of the character and the emotional inflections where so realistic that I forgot in the final fight scene that it was a TV show. When Spike Spiegel stabs him in the leg and he breaks down and cries "why Mommy?" I felt his pain and started to cry.

It's not often that I feel for the bad guy in the end, but this one kind of gave me the feels. I was also kind of angered when they left the dog behind, but I see in episode 9, it's back, so I won't try to get the show canceled by complaining on Twitter.

By the way, Pierrot became French for Clown (not exactly the same meaning but close enough), also of note the troop of players where from Italy and played primarily in Paris France when the came to fame. 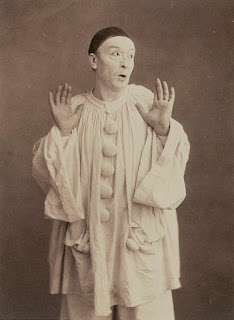 Photo taken by Nadar in approximately 1855 and depicts Pierrot Le Fou, and is from a previously linked article from Wikipedia.
And for the heck of it here is a VIDEO to watch (or listen too).