Not So Instant Communications 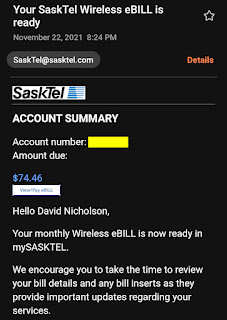 We all think email is delivered at light speed. We don't realize sometimes, it gets stuck in the system for a while. My bill comes out on the 16th (yes this is how much unlimited talk and 1gb of data is up here in Canada), but it was delivered on the 22nd. 5 days after the email was generated and sent. It normally is in my inbox on the 16th when I wake up, and I wake up early.

It's like texts. I have sent a text in the past and it was not received until 2 days later. I was actually out for coffee with the guy I sent it too when he got it LOL. As well one time I sent a text that I was ready to be picked up. 5 minutes later I got picked up and as I got into the car BING goes his phone and it's the text I sent. I love that is tells me it was "received", when in reality it most likely has not been. And as well, received is not the same as they read it. It would be easy to notify when it is looked at, instead of when the system thinks they got it.