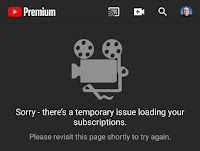 I've noticed that YouTube had finally fixed the subscriptions feed. I like to "remove" videos after I watch them so the feed is only unwatched videos. For a very long time now there has been an issue where after a week or 2 the videos I removed would show back up in my feed. I'm glad to see it's kind of fixed now. But what this shows up at the end of the feed instead of it saying "no more videos" or just ending, I don't know. But at least all the watched videos I'd removed are GONE now.

I said a while ago in a Tag Video that I don't watch anyone over 50K subscribers. I just realized that a couple of the music channels I follow are at almost a million now. So I guess I was wrong. As for Vloggers I think Steves Family Vlogs is the biggest channel I watch at a bit over 7K subscribers, but I could be wrong.

As for other channels I really enjoy there is mehquig (been following him since I first got on YouTube over 12 years ago). Parmesana - never miss a vlog she posts. It Starts With a Step. dagocleo. Baphy1428. Al Cursi. 1954shadow. Cursi (his music). J.R. Bjornson. Rebecca Thompkins. SimplyTwee Begins. Vampire With a Podcast. Vanessa WOH. There are many others, but too many to list.