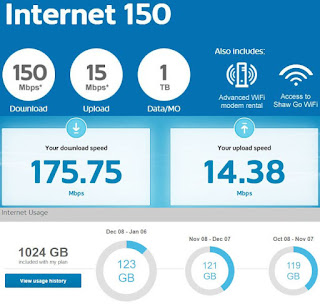 This is Shaw Internet 150 (Wide Open 150). I have had it for a while now. I have literally no hope in hell of going over the bandwidth limit by myself. I would have to be downloading, uploading videos and steaming Netflix the 24 hours a day LOL.

Strangely enough the WiFi used to drop on me several times a day with the old modem and the new one I received for the 150 plan has not dropped once. In fact it's got a better range on 5 GHz and 2.4 GHz. Before I could not get into it on the main floor and now I can even at the back door to my building. It's making it's way thew a concrete floor to do so. So I'm impressed. On a side note the main floor and the basement of my building have Shaw Open WiFi on them that is equivalent to their Internet 30 plan (good for when I am going laundry and want to watch vlogs).

As you can see I am testing down a bit faster than the 150 Mbps I am allotted. Sadly the upload speed is not cooperating. Every other time I have tested it, it's been around 17 Mbps. BTW this is peak time 4pm. So most of my building uses Shaw and there are a LOT of them. So I'm impressed that I am getting 14.38 up at this time of day. Normally I upload my Vlog to YouTube in the morning just before noon and there is never a problem. This is on a wired connection BTW. WiFi I just tested at 116.68 Mbps down and 14.53 Mbps Up. WiFi is always a bit slower - It's just the nature of the beast. In fact at this time you can't go much faster than this on WiFi. If you do, you are not in a building like mine surrounded by signals.

All in all I am more than happy with my service from Shaw. Most of the time when I have a problem I deal with them on Twitter and it's resulted in short order. When I have to phone, it's generally a mild wait (sometimes a long one) and they have always fixed things right away after I get them on the line. Now I did have a problem with them phoning me to try and push services but I got that fixed after complaining on Twitter a couple of times.

I am no longer a fan of Cable TV what so ever as I don't think it's worth the money. But if you want to have it and some REALLY enjoy having cable TV - I would go with them for cable and TV in my aria. Sasktel is NOT really an option. Sure I can record a rediculous 6 shows on Sasktel, but when in the world would I need that? Sasktel is down way more often than Shaw is and the internet prices are about the same and so is the TV prices. The thing that makes Shaw tip the scales for me is up-time and support, not to mention the 3X faster upload speeds on average. But if you have a large family and go WILD with the dowloads you might want to go Sasktel for the unlimited bandwidth. I know people who have sank 3TB in a month and NOT been complained at on Sasktel. Yes they do torrents (lots of them).

For phone (land line) I would go with Shaw any day - just have a power backup plugged in just in case as it's VOIP. The price is much more reasonable for local and long distance. I tell you if Shaw had 4G cell service I would probably be using them instead of Sasktel as well. But oh well...

The service is about $100 a month after I finish my 2 year deal. The reduced cell phone plan I switched to more than makes up for the $20 a month difference in the plan I was on to this plan. I have literally no need for 10 GB of data on my phone so I reduced to 1 GB and only Canada wide calling (used to include the USA as well). Being that there is only 1 person I can't get hold of with messenger I won't miss the US long distance. So with the reduced plan on the phone I am actually going to be $5 ahead of when I was using the Internet 30 plan. Also almost every place I go here and in Regina or Saskatoon has WiFi - so who needs all that Data. LOL.

On a side note - YouTube still stalls now and then in the afternoon LOL. I'm telling you it's got nothing to do with Shaw even though YT blames it on them.

I forgot to mention they have free access to Anti-virus for PC users. So that is a bonus that Sasktel does NOT have. I also have the ability to register 10 devices for use on their WiFi locations around Canada and 10 Email Addresses. So this should keep any family happy. Even if you had 3 kids it still works out to 2 devices each LOL. And yes for a family this is the best plan for the money I think. As a content creator on YouTube I also like the faster upload speeds. That's it that's all - Have a Good One :)