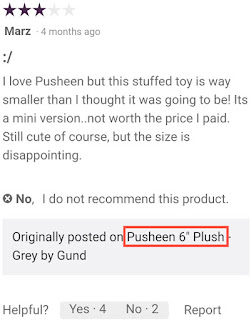 OK I know that MOST people are not dumb. But if you go by online sources and the vocal people in your aria, you will think that the vast majority of people are stupid. Like clinically stupid. Here is a perfect example of what makes smart people think the rest of the world is dumb. The item is LISTED as Pusheen 6" Plush - Grey by Gund. What does the review say? That the toy is way smaller than they expected it to be. Sigh. It literally told you how freaking big it was. It seems that the vast majority of stupid people seem to have the need to prove themselves stupid. Several years ago I got this same toy in the mail after ordering it. It was my first Pusheen anything. Like this the web page said 6" Plush. So when it came in the mail I opened the package and thought "OMG how cute" not "I't smaller than I thought". Ya know - not being too stupid to realize how big 6 inches is. I can only surmise that this person thought it was 6' not 6" and when it came and was not the size of a football player - they went "WTF it's so small". For example an average photo print is 6 x 4. So when you get them printed do you say to the person at the counter "why are these so small"? Sigh. The fact remains that 98% of people who buy things know what they are getting and only if it's NOT what was advertised do they every review the product. I on the other hand review everything I get online - but I am kind of strange that way. Being that I have interacted with many many people in real life (yes people still talk to each other) I can tell you that the average person is NOT stupid. It's just when you go on social media, web forums and the like that you find a mass of very vocal morons that think they have a massive intellect when in fact their pet rock has more going on in the brain than they do. So all I can say is, don't judge people from what you see online or in the media for that matter.