THE PRICE OF ESCAPE IS TOO HIGH 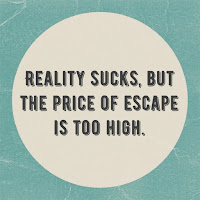 Ya know I like to get drunk now and then. Not blind drunk, laying on the carpet till 4pm the next day - but drunk. But I know first hand what it's like when people escape reality all of the time. It never ends well.

We all do it. We have a few drinks of a THC gummy or we watch Netflix all night. We get away from reality for a little while. But then we go back to it and deal with the things we need to deal with.

For people like my brother, escape from reality became the norm. I saw what it did to him. It destroyed him. At one time he was quite fit and strong. By the end he was neither of those things and he has lost his mind.

He had spent years drinking heavily and taking narcotic pain meds at this point. The result was he was not able to tell reality from delusion. This is a pain I know first hand but for a different reason and thank God they got me stabilized with medication. For my brother the medication did not work and had horrible side effects.

In the end after they finally let him out of the mental hospital once again, he must have decided it was not worth it or that he did not want to go back there. He took his life.

I felt there was something strange when he wanted the location of the plot Mom was buried in as that is where he also would be planted - you can get up to 4 cremations in 1 plot. But sadly I had no clue what was going on or I'd have contacted the hospital he was in. None of us saw it coming.

For most of his life he drank and after a failed attempt to run a business he fell into the hole of addiction deeply. Before this attempt he had already lost his family to the drinking. Even after his ex died he was not allowed to have his Son with him for more than a few days at a time.

He jobs all vanished in short order as well. Nothing stayed but the desire to self medicate.

I told my Mother not to co-sign the load for his business. I knew what was going to happen and I knew he could not control his addiction or the business. I was sadly very right about this. It's even more sad that Mom lost everything over it to pay off his debts.

For a short time in Moms failing years she had forgiven him and he visited a couple of times. But sadly he was not even able to come to see her off after she died. I had no help from him in caring for her for years as he died of cancer. Then again I had no real help from anyone at all. Sure support of friends but no actual help.

I have so many reasons to lose myself to his kind of thinking. I am in constant pain. There has not been a day in almost 3 decades that I have not had pain. I am living in debt as I have no savings and a bit of a disaster left me in the hole probably for the rest of my life.

My family treats me like I am dead. Not one of them phones me or even comes to see me. Not even the ones in my own city. After Mom died they turned away from me. It started when I went on disability, they literally stopped talking to me and treating me like a person. When I ended up in the news paper holding a gay pride flag it was worse.

All of my friends (well most of them are my family now) are in the same boat as me - disabled and/or broke most of the time. We have very little but we have each other.

So yes I could turn to the bottle or to drugs and escape reality as much as I can, but I would lose the people who care for me. These people are worth the pain and the suffering and the poor life I live. They keep me strong and I don't want to let them down.

Seriously the term "feeling no pain" is real. You can kill the physical and emotional pain for a short time with booze or pills. That makes it all so tempting. The sad part is this does not work for long - when you use too long - the ability for it to kill the pain is replaced with a new kind of pain. It's a total loss and when you allow yourself to be addicted, it's often too late.

The ability to break addiction is extremely difficult. It takes a lot of effort and will and training to do so. Most people in our society fall back to addiction as there is not nearly enough support for them. So I can't fault my Brother for what happened to him and to us all.

From seeing what happened with him, I realize the price of escape on a "grand scale" is too high. I'm not willing to lose it all in the false hope I will be able to escape reality for the rest of my miserable life. I know it's a trap and it ends up being far worse. It's just not worth it.