My Friend Has No Taste 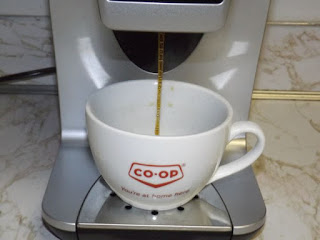 I told a friend he needs a "french press". His response? "They make terrible coffee". Sigh... NO they make the BEST coffee - you just have to drink it right away. He then goes on to tell me, "I make a pot then put it in the fridge and heat up a cup now and then for the next 2 or 3 days." This is when I realise he literally has NO taste at all. If he thinks 3 day old re-heated coffee is the best thing ever, then he has no taste - I am sorry... This is NOT an acceptable practice to someone who really loves good coffee. He also seems to think that the pod coffee makes make crappy coffee. Again NO TASTE. They are expensive and a pain in the ass, but they make awesome coffee. I then ask me (knowing the answer) "How do you like espresso?" His reply "It's the worst coffee imaginable." Yup NO TASTE. I wanted to make an analogy about 3 day old coffee and licking an ass, but I am kind of sure he is into that kind of shit... So... What can I say? BTW the top end of coffee is "Blue Mountain Blend." We both had a cup of it at a friends place. This is an orgasm in a cup if you ask me. It's the perfect cup of coffee and it literally rolled the eyes back in my head. He looks at me and says "This really sucks, but I don't want to tell them." This is a bag of coffee that casts more than he makes in a week. BUT oh well, NO TASTE. Oh well this is the same guy who thinks he can talk the dealer into selling him a new car for $4000 less than a used one tax included. I almost spit my coffee out at him at this point. But oh well. He is a good guy really and has done a lot for a lot of people. But he has some strange ideas and NO TASTE in coffee. He also hates whisky - so NO TASTE.