SHAW SPEED TEST FREAKED ME OUT 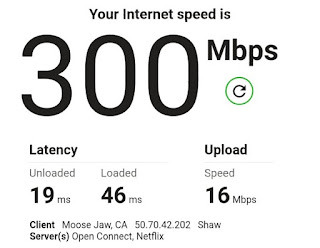 Had a bit of a HUH moment when I tested my speed the other day. I had it coming out at just over 100Mbps and it's supposed to be 300. So I contacted them on Twitter and they send a service guy. He tests it and it's 300. Well then he tells me that their OWN speed test does not work and I should use a different one. Sure enough, I fire it up and my phone hits exactly on 300. that upload speed though... Sigh. We seem to have an issue in all of Canada where they conspire to give us pathetic upload speeds. As well, I don't know who's IP is showing on this, but it's not mine - can't figure out why not.