WALK AWAY FROM THE EVIL EMPIRE OF THE CHURCH 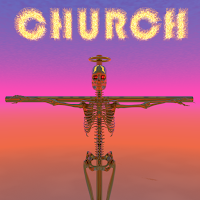 I have to seriously wonder about people who still follow organized religion. The idea that they are a controlling force set on making people obey blindly should be enough, but it's not evidently.

Yes I realize that the church does good. But a man who gives to the poor and rapes children in his spare time is not considered to be a good person. So why do we still call the church good when they on mass hide the fact that they are molesting children right, left and center?

Recently one priest came out with "Pedophilia never killed anyone, abortion has". Well I don't care where you stand on the abortion issue, unless your are a blithering moron, you have to realize how utterly stupid and manipulative this statement is. Not to mention telling of the state of morality of the church and it's priests.

Child molestation has killed a great deal of children either directly or indirectly. Some of these monsters like to make the children suffer and die for their pleasure. I guess this fucktard priest has no grasp of that.

There are also a lot of instances of drug abuse among people who have been molested. There is also a heightened rate of suicide. This all due to a system that blames the child instead of the monster that abused the child.

Lets quote another official of this so called church, "children seduce the priests". Who in their right mind would think this? A child has no sense of sexuality and is thus not capable of wanting some rapist priest to harm them.

All I see is a system that is set up to justify abuse and on the other side gives aid to people so they will ignore the fact they are raping children.

No, I'm sorry I have to say it's time for humanity to shed the church and be rid of this evil empire for good. If these monsters had real jobs, a few acts of charity would not allow people to ignore their evil actions.

No it's not just one church either, it's all of them. Whenever you have a system where power is granted over the helpless, you will find monsters taking advantage of it. But in this case we call it "good for their souls".

If you want God in your life you can well do that on your own terms without funding rapists animals. You can meet up in small groups and worship or do it on your own.

The path to God is an individual path, you don't need to pay for it with money, time, your children, or anything else. Walk the hell away from this abusive system and stand on your own, as many have started to do. Most people I know that follow God do it on their terms and do NOT go to church.

There is a reason I decided to worship in a vastly different way and give thanks to older Gods and Goddesses. Just do your own thing and forget these institutions that have abused their power for centuries.