SOMETHING IS SCRATCHING ME IN MY SLEEP 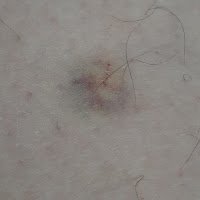 OK since I moved in here there has been some strange stuff going down. The most of it was my one stuffed toy being turned clockwise almost every morning. In fact, I literally saw it turn one day but could not get the phone out in time to record it.

Well seems the spirit got tired of playing with toys. Since the toy stopped moving, I've been getting a lot of bruises ans scratches on me. I will wake up and there will be a new one somewhere. Most of them small, but 2 of them where around 6 inches long (scratches). These are deep scratches that leave a trail of little scabs.

There is nothing in my bed that can cause this. Being most of them are on the front of me, it's not the bed doing it, as I can't sleep on my tummy - it's not possible for me.

I also do now own any pets or have a room mate. I'm just here alone most of the time.

There is also the matter of printer paper. I swear to God it's going missing. I'll put 60 or so sheets in the printer and a few weeks later there will be 30. The entire time I'll have printed off maybe 5 or 6 sheets. It's not like someone is breaking in and just taking paper now is it?

Then there is the spoon... a spoon went missing and I never found it. So yeah some strange shit going on in here.

The weird thing is my BFF is what's called a sensitive. She can feel spirits and she has not mentioned feeling any in my place. So I got no idea what the actual hell.

Now I often get the sense as I'm waking up someone is calling my name. However, this turns out to be extremely common. Almost everyone over the age of 15 has had it happen and the older you get the more likely - so I can pass that off. But what is scratching me?

P.S. I'm also missing 1 bowl. Not like it would end up under the bed or anything. Besides I've looked.