First freezing rain came and then blowing snow. We have very little accumulation of snow however. The winds on the other hand topped out at 110 kph (68 mph). As you see it tossed our recycling dumpster on it's side in the parking lot. Don't know if we are still on for coffee tomorrow (my coffee group), but I rather doubt we will be going. 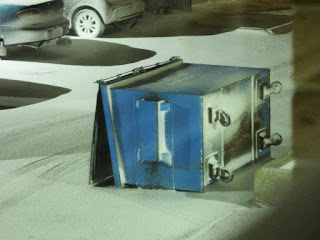 Other than the winds this was not nearly as bad as some. In the winter of 1978 we got 5 feet of snow in 2 days. The snow drifts where up to second story windows. The police phoned every number in the city to see if they needed to be rescued. My brother and I went out a window to dig out the back door and make a path to the garage. My Dad had to go to work (he was a cop) on a snowmobile. The entire province was shut down for several days and some of it for over a week. 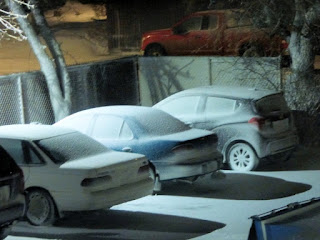