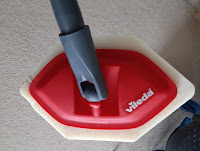 Just got this on Amazon for about $15. I got it to do the bathroom floor between the toilet and the wall, as I'm too disabled to get down there on my knees to do it by hand and bending over puts me at risk of a stroke (been told not to bend over for long).

I have a feeling it would have worked fine if it was not as dirty as it was. That being 6 months of not being cleaned back there. What happened was it just ended up cramming the dirt in a wad in the corner and I can't get it out of there. I tried for 10 minutes to extract the dirt to no avail.

Also I wanted to clean the side of the toilet with it and there was no way in hell this was going to happen. The swivel head works well for everything but this task. Being a male, I tend to pee standing up. Yes I know if I sit I won't miss, but my knees bother me and it's literally a pain to sit down on my toilet as it's kind of low. So there is muck all over the side of the toilet in there still. I also can't get the normal big mop in there at all, so I'm out of luck I guess.

To be honest I think if I started at the far end between the toilet and wall, I would have not had it wad up along the back corner. It did well getting the edge around the toilet and the floor where there is always gunk. It was not 100% clean but much better than it was.

So I'm still at a loss of how to get it cleaned in that aria. I guess next GST (sales tax rebate) I'll get a cleaner in to go the place nice and well and be done with it and just try hard to sit when I tinkle, but some days it's literally a pain.

Getting the gunk off the scrubby end of the mop is a bit of a task and needs to be done by hand under the tap as well, but that was expected.