Mom Would Have Been 90 Today 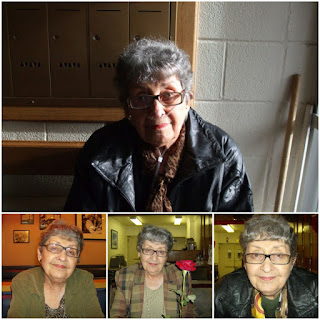 She used to drink 24 cups of coffee a day. We would sit in her apartment for hours and drink coffee and just talk about anything.

I think the fact that I had to care for her near the end, made our bond even stronger. I'm all she had after all and I was there, even when I was hurting like hell from Fibromyalgia. Nothing stopped me from doing what needed to be done.

In the old days, at school we would make a card for our Mothers. I honestly don't remember when we stopped doing that.

Later I would use my allowance to get her a card from the store. Then in High School I added on a single rose. Later in life it was a flower arrangement. I'd have to say for months to get the flowers, but it was worth it.

In the old days when the family was all under one roof, we would always get the KFC Mothers Day Deal. It came with this crappy cake that for the life of me I don't know why anyone likes it - but everyone else did like the cake.

After when it was just Mom and Dad they went out for it and I would tag along. When I moved back in with them after becoming disabled, we continued to go out or order in. Mostly it was Chinese food.

When it was just Mom and I, I would make her a meal. On all the special days I'd cook the things she loved and we would feed on them. Lazy cabbage rolls, perogies, several kinds of veggies, a garden salad, and rolls - there HAD to be rolls with special meals.

When she was in the care home, I'd bring in something nice to eat other then the junk they fed her there. It was usually Pizza on special days. To be honest, she was excited for the nicer food, but she did not really get why it was happening and the next day the memory would be gone. I guess it was just as much for me, so I could see her face light up and her enjoy the food.