Place of My Youth Part 6: Home 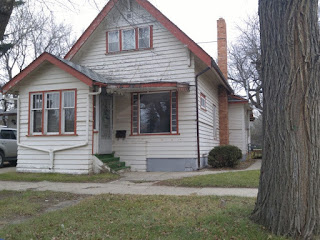 This is the house I first remember being in. Before that I was in Saskatoon and have no memory as I was adopted at age 11 months.

It was a bit of a walk from here to the school that I attended and trust me there where no kids within 2 blocks any direction my age.

There was this shotgun house beside ours (to the left in this photo) that is no longer there. The people who currently own the house bought it and tore it down and added it to their yard.

The lady next door was kind and always good to me. She was obviously a lot more poor than we where, but she always had a cookie and a kind word.

To the right was Judge Pope. He had a dog named "Coin" that I called "Hoin". I'd climb the fence to interact with the dog and my Mom would get ticked off and yell at me for it.

This was not far from the then edge of the city and my Brother and I would go to there place that is not filled with houses to play. Most of my youth was spent out on my bike, with my Brother or my Friends you see.

At the age of 7 we moved and I was very upset by the move. I did not want to move as I thought I'd never see my friends from school again. I had no idea that we would be moving closer to the school.

At the new place I was close to my school friends and could walk to their places to play - something I was not allowed before that as it was too far. There where a lot of kids in the aria and it was a lot more fun.

I remember spending most of my free time year round outside and with friends or exploring alone. Those where the happiest years of my life and now looking back I have no idea why I wanted to grow up so badly.

I do have to mention I was a demon child LOL. I got into all kinds of minor trouble and was quick to say something smart when I got into trouble. But I did grow out of it eventually. I have to say I hung out with kids who did a lot of bad stuff but I would just stand there and watch them be a dumb ass. I got in trouble because I would not dime them out mostly.

In school there was the book in the office for all the other kids, then the one for my group. As I said, I almost never did the stuff, I just watched, but I also did not try to stop them and I did not go tell on them - so guilt by association.

To be honest the other two kids where assholes looking back on it and I could have done better to say the least. They treated a few of the other kids like crap and it was not right. I wish I could have the time back, and I'd have stopped them. You see I was hellish strong for my age and I could have made them stop, but I just stood there.

Well that is it for the series, I hope you enjoyed it.