Places From My Youth Part 1: The Burger Palace in Moose Jaw 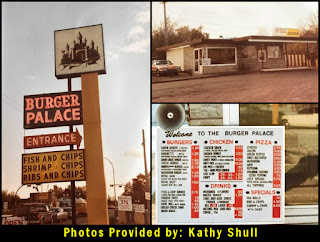 Part one of a series of places we used to love as a family, The Burger Palace. I asked for photos of this place in a Facebook group and was provided them for my blog post. Much thanks to Kathy Shull for looking for them for me and sending them to me.

Some of my earliest memories of going out to eat at the drive-though was at this place. It was run by a very friendly guy by the name of Leo. There was one little table inside to wait for your pickup order as BTW.

We would get our food and park facing Main Street and watch traffic go past. The food as I remember was amazing. I almost always had the mushroom burger.

Now and then Dad would go there and get a pizza for the family after work. That was also very amazing food as I remember. But to be honest, it was the only pizza I'd had at the time.

It was just after I started to drive a car myself that the place was sold off to make way for a new development on the block. I was sad to see it go and have many fond memories of eating there with my Mom, Dad, and Brother.

There was this one time a guy was road raging a fellow in this tiny car. He just flipped out on the guy and to be honest, from what I recall it was the guy freaking out that almost caused a crash. The door of the small car opened and out came this rather massive fellow with the kind of muscles you see in the movies. He towered over the guy who was yelling obscenities. The man making the fuss just got in his car and drove off. It was a hilarious site.

We where at the B.P. at random times for years, it did not matter the day or time, Leo was there cooking.

I've never had a mushroom burger that I liked better I have to say. The only one that came close was in Regina at a place called The Burger Barron. That place also sold out to new development a long time ago.

You can see the prices on the photo if you click it to enlarge. It was not fancy at all, but it was one of the best places I've ever eaten. Then again I may be romanticizing it in my older years.
moose jaw Saskatchewan