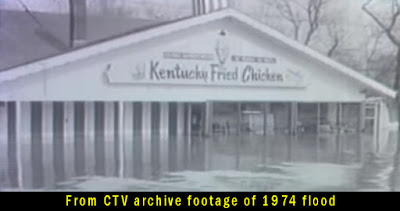 We used to get KFC in the summer every Saturday that Dad was not working days. We first got it at the place in the above photo before it flooded. Dad would go in and get our chicken and some paper plates and we would go park in another part of the park it was in. At the time the park was called "River Park". After the flood, this place was torn down but the land was still owned by the same family and many years later the son of the man who ran this KFC put up "The Burger Cabin" on the same spot.

After the flood the KFC was relocated to a spot just outside the east entrance to River Park. It was on a hill and a lot less likely to be flooded out. It was still the same format where you went in for pickup only. Years later it had an addition added on for dining in.

None of us eat the buns, we tore them up and tossed then to the Seagulls that would beg for food in the park at the time.

After our meals, my Brother and I would get out and run around the park for a while. Most of the time we where by the river where there is now a parking lot and a gazebo.

Desert was at an ice cream shop that will be the next post in the series.