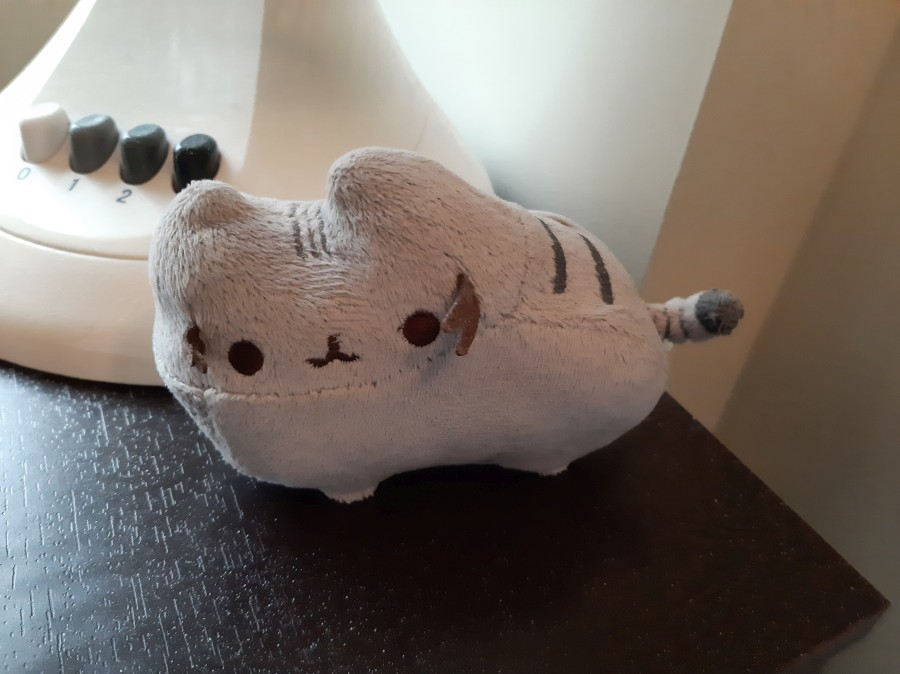 My first Pusheen plush ever. This is my favorite thing that I own. It brings me a great deal of joy. I pretend to feed and water her and I hold her and walk around the apartment with her at times. When I'm in pain, she helps just by me holding her, the same with anxiety attacks. I even talk to her. 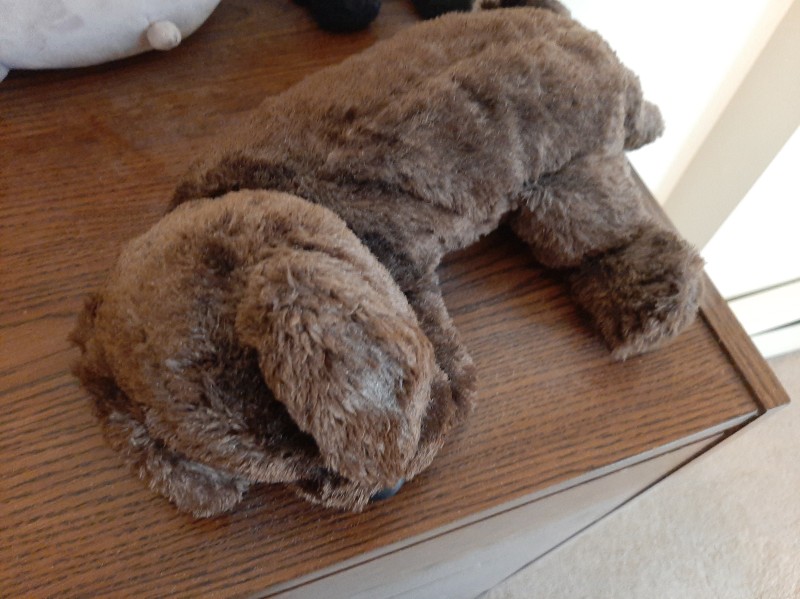 This was Moms and she had it sitting in her bedroom on her dresser. It was just for decoration and a sort of fill in for not having a real dog. She has always had a dog you see until the last one we owned died. When we moved into sperate apartments she got this for comfort. 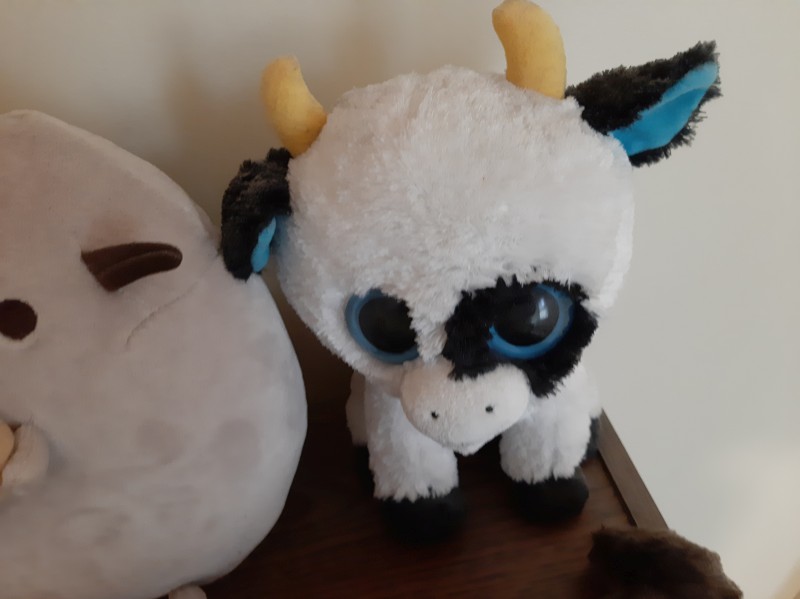 This is Jasmine the Cow. There was a joke on YouTube in the early days with a fellow YouTuber and several of us got named the "Cow and Bull Club". I miss those wilder days. Now people have grown away from the fun we used to have - the crazy fun. I guess we all just aged and lost the energy it takes for the silly things. 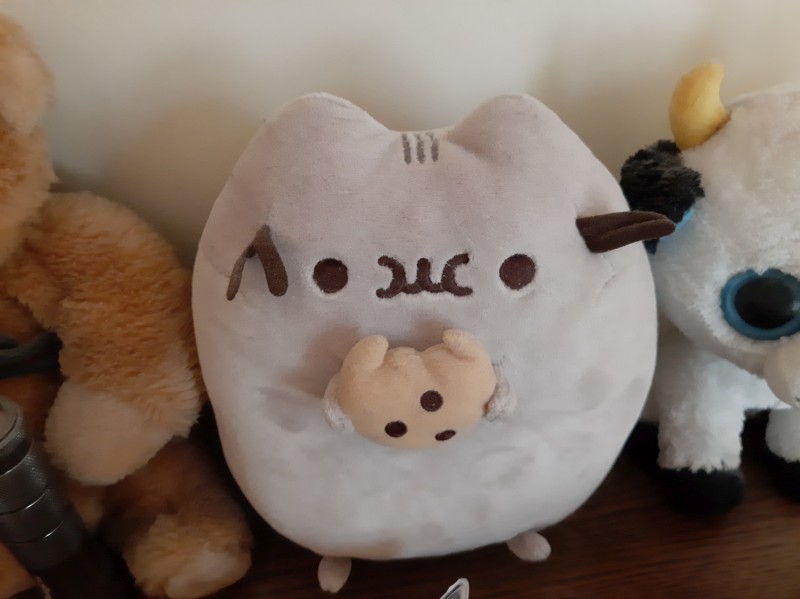 Cookie Pusheen was interesting to get. I first ended up with a Chinese bootleg version of it off of Amazon and had to bitch to get a refund and the seller got pulled. You will see the bootleg below. I don't interact with this one much, but I like looking at her. 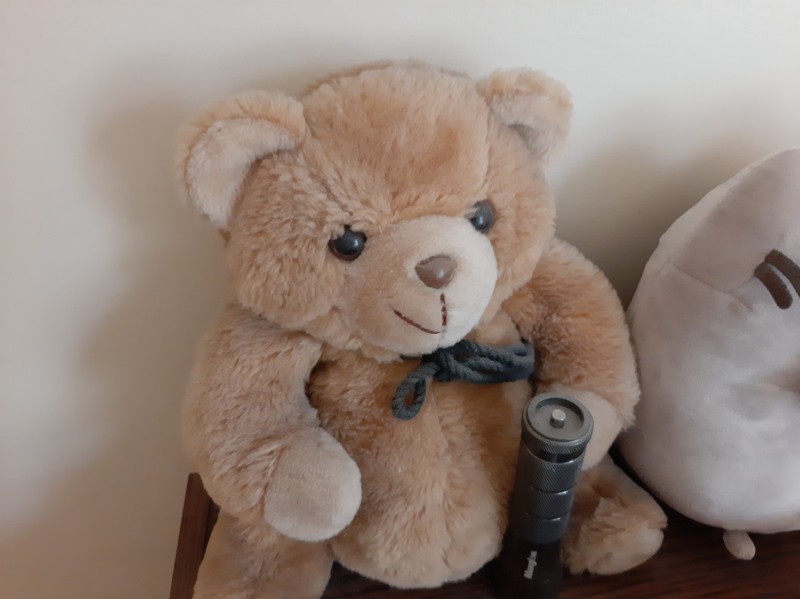 This is the bear I got Mom when she was in the care home. She would hold it and sit in her chair for hours. That is, until she was unable to do so. It gave her some comfort after she started to decay mentally. 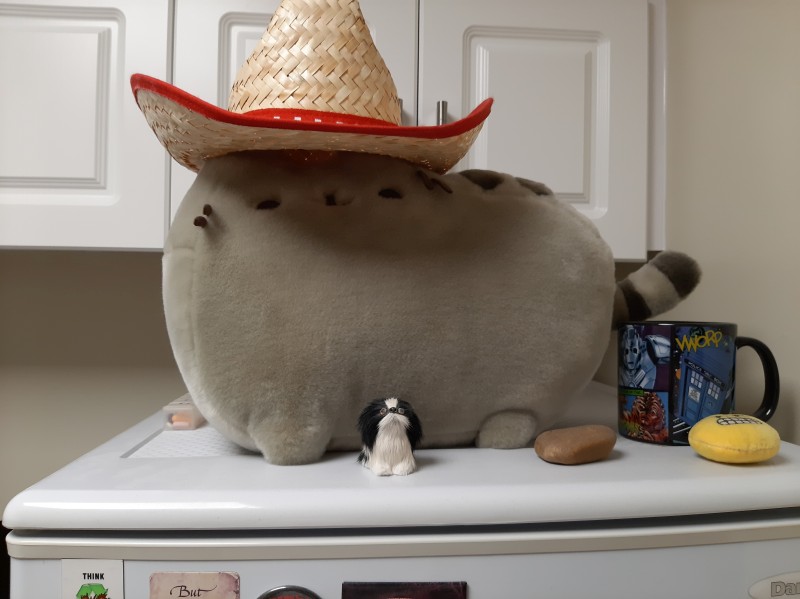 The large Pusheen is a bit rare, as she is 14 inches and not 12 inches. These are no longer made and have not been for some time now. This was hellish expensive to import as it was expensive in US dollars and the exchange was horrible, not to mention import taxes. It was almost $80 in total, and they held her hostage at the post office until I paid the taxes. 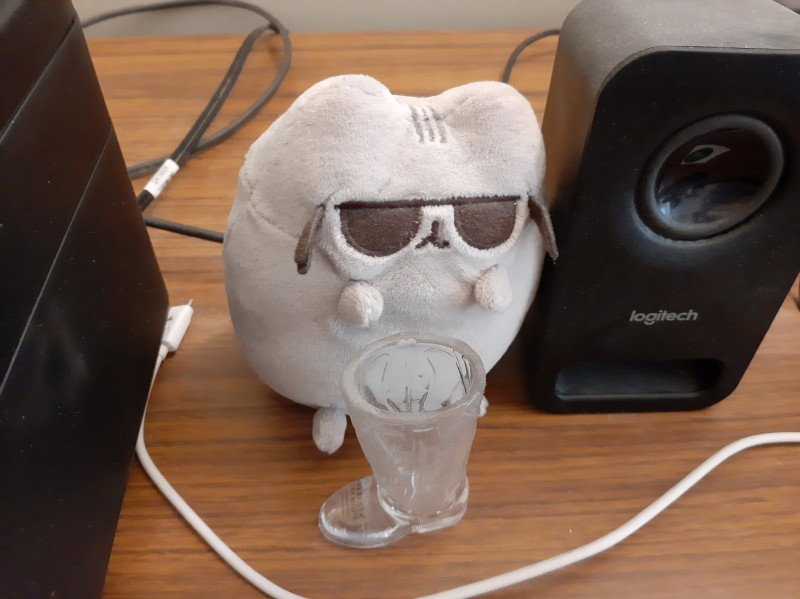 I call her "Blues Pusheen". She was part of a set with the one below. I just had to have them and had the money, so I got them. 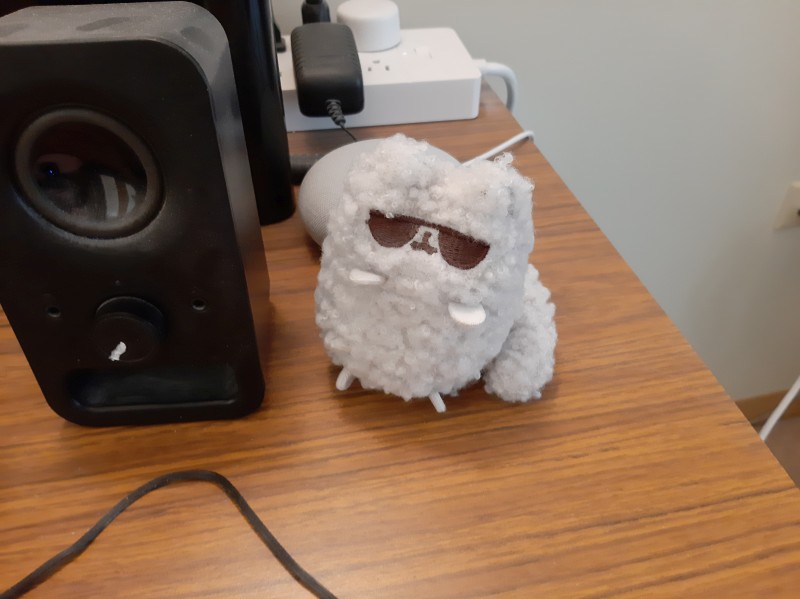 This is "Blues Stormy", Pusheen's sister. She was part of the set of course. 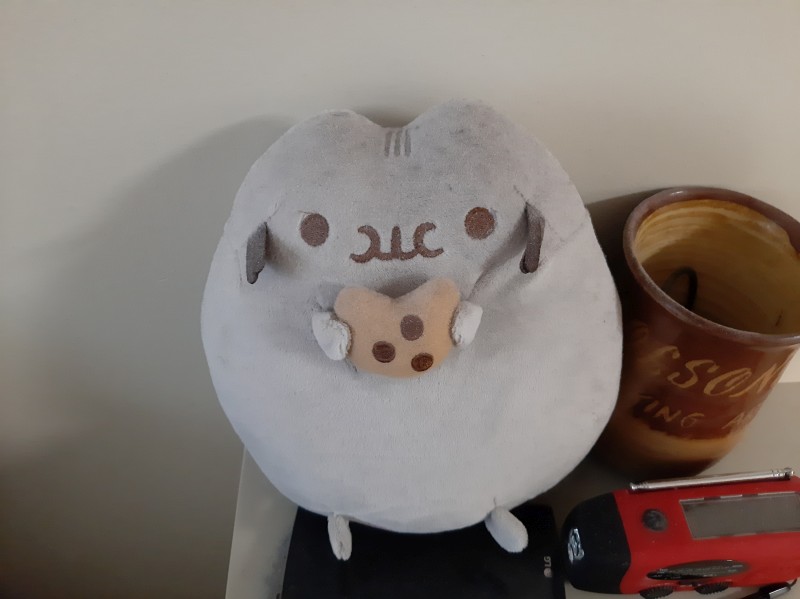 Fortune Cookie Pusheen is named this for the shape of the cookie, not to mention it is the Chinese bootleg I ended up with before I got the real deal. That took like over a week to get it all sorted out and get my money back, they also told me I could keep her. 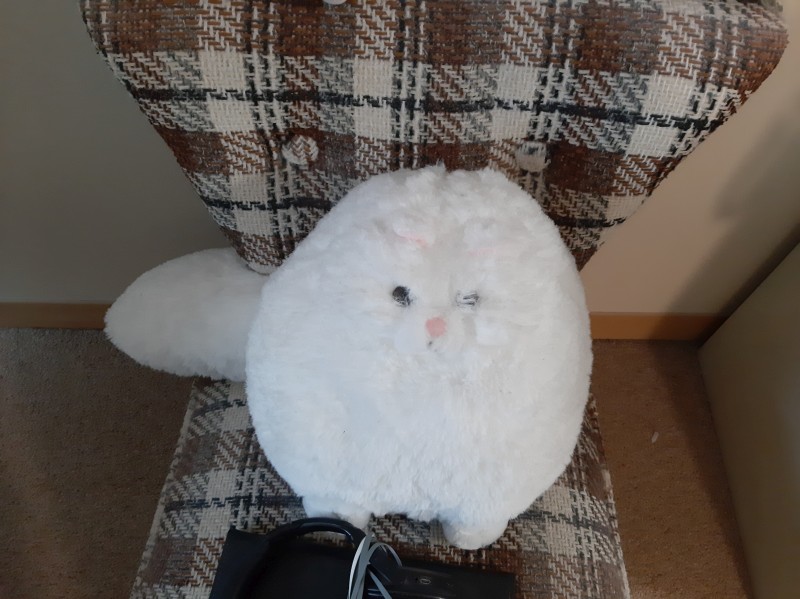 Fluffykins is rather large actually. She is 24 inches tall and has a long tail. You have no idea how soft she is and it's nice to just pick her up and squeeze her, or rub my hands on her. My best friend loves her as well and I could have given it to her, but her cats would destroy it instantly she tells me. 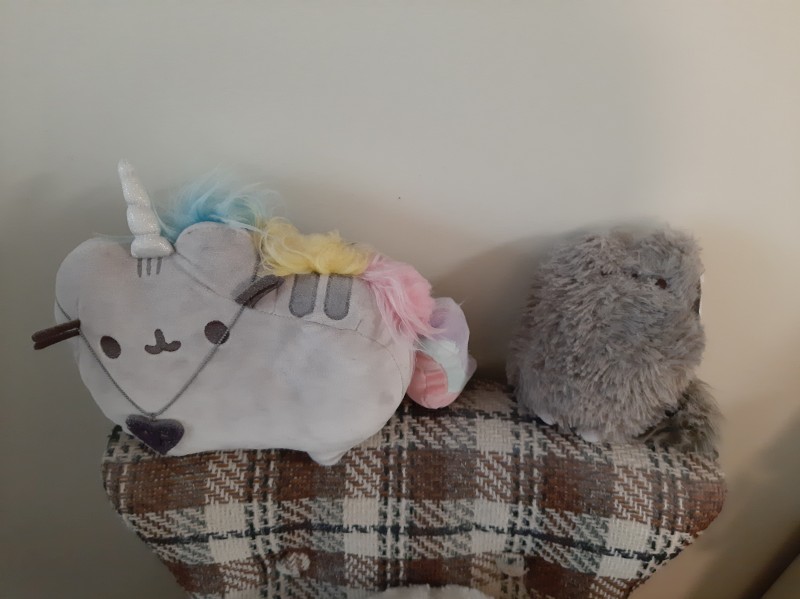 I only took 1 photo but I have 2 of these - the Pusheenacorn was one of the first creature spin-offs of Pusheen the Cat. She has a necklace made by a friend with my Moms name on it. As you may notice I need to spend an afternoon cleaning my stuffed toys, they are all covered in dust. 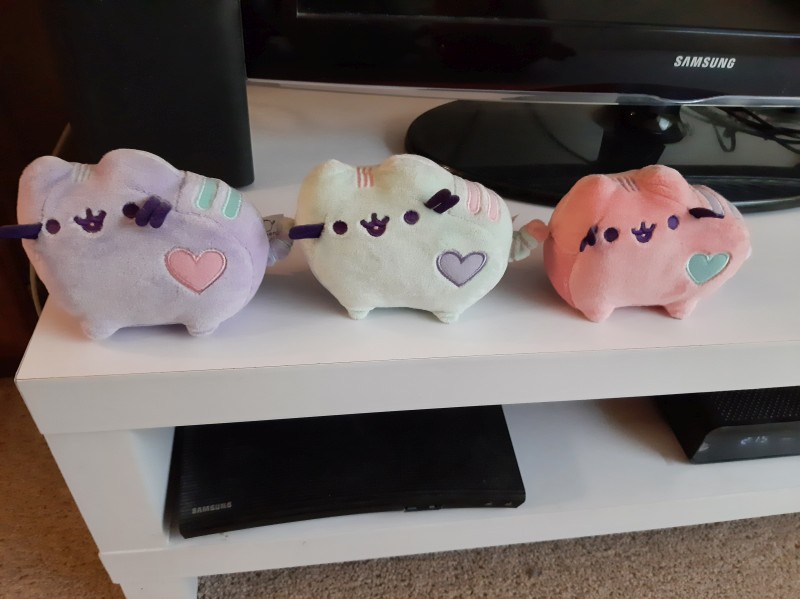 The Pastel Pusheens have a story. I ordered the second and last one first, not all 3. The order was dew days before and this old lady in the common aria opens a box and pulls out the same exact 2 toys. I'm almost freaking out thinking it was my package but I had heard the one lady tell her it was addressed to her. Mine came the next day. What are the odds that 2 people in the same building get 2 out of a set of 3 toys and they are the same ones - 2 days apart? I hold these ones sometimes as well.