Snow in April is Not New and a Side Story 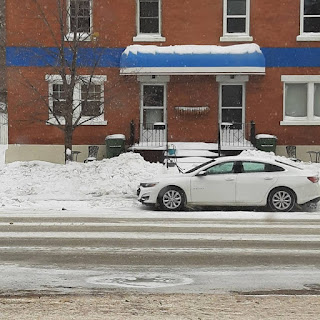 This is the snow we got a while ago, you know, in April. Yup, April.

So I was going to skip this one then I saw Twitter explode because people in Ontario think the world is ending because it snowed. Some are literally blaming the government - figure that out.

Here it was like "shit it snowed, Oh well". Ontario it's like "the fucking world is ending, motherfucker! Why is the government not doing something". LOL

Seriously it's the top trend on Twitter in Canada right now. I'm fucking going to pass out from lack of oxygen to my brain I'm laughing so much.

I posted this photo in a Facebook group and people freaked out. To be honest, it's happened before in April, I looked it up. I just don't remember it for some reason.

In fact it happened in May one time. This was probably around 20 years ago. A friend and I where at the truck stop on the North Service Road (Rodoes and it's no longer there), and we where almost alone. There was just one other table in another section that was taken.

Well we where playing a word game and I looked out the widow and said "holly shit, there is snow up to the bumper of your car, we are stuck here".

At this point in time the woman in the other section who was sitting by a large window notices it as well and freaks out. This is the tragic part and the lucky part. She triggered a seizure and they had to call for an ambulance.

The city sent out a snow plow to get the ambulance to the restaurant and we quickly followed it back into the city.

Now for a really strange twist. The woman ended up living next to me for 3 years before needing to go into a care home. She also remembered my from the days when the Co-op had a café in it and everyone went for coffee there, and I would take Mom in for a coffee.

Sadly her son died before she did and I never did find out from what. But yeah, this is not a new thing with the snow LOL.