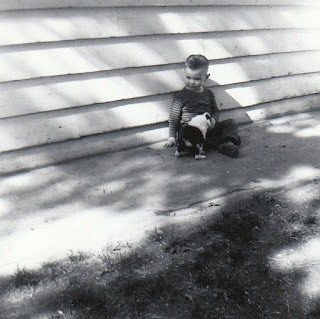 This time you get Me and a Puppy. I think it's Corky. I found a photo on a Facebook group but could not get permission before I posted this, so I'll not use it.

The A&W Drive-In on the west side of the city sat on Caribou Street West just across from a service station. It was a hub of activity hear round.

You would drive up and the waitress would come out to your car and take your order. Then the order was put on a tray that hung from the window of the car.

We would generally get the same thing every time, that being Teen Burgers and Root Beer. The place always had others at it when we went there and sometimes we had to go for a bit of a drive before we could get a spot.

People would go in groups and get out of the car and talk to each other. It was a bit of a social hub.

We would sometimes get a gallon jug of Root Beer and take it to the Wild Animal Park and have a picnic then walk around and look at the animals. It was never the same after the place closed and they moved to Main Street and had a dine in restaurant. However we would go there and get burgers to go and go sit in the park and eat. After Dad died, I often took Mom there and we eat in the car on warm days and inside on cold days.