Places of My Youth Part 5: The Barber Shop 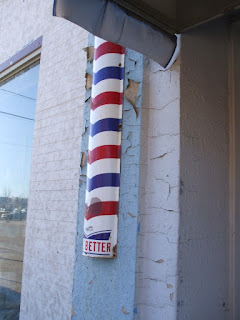 This is actually a photo I took of a then closed barber shop on 1st N.W. not the place I'm about to talk about. I've not found a single photo of that place.

The barber shop I grew up with was "Erle's" he was just under 6 foot and slightly fat. He was bolding and a happy man. I remember he had this plank of wood for us small kids he would put on the arms of the barber chair to make us sit taller.

The other think I remember was this small demonstration model Electrolux vacuum he used to clean off the hairs after a cut. I've never seen another one other than a friends collection.

The shop was off a busy street (9th N.W.) and you parked in the back and walked to the front to go in. There was a hall to the back where a beauty shop was. There was a constant repugnant smell from the back that I now know to be associated with perms.

When I was older he would use a straight razor to clean up my neck at the back after a cut. To be honest I've never had a better hair cut that I had from him. It was not to last as nothing is and he closed soon after I started to drive. Before that I'd ride my bike to his shop for a trim.

The next place I went was near the police station (city hall) on the zero block of Fairford St. W. The name of the place escapes me however but there where two men in there and it had this mirror all the way across the back wall. It was always a bit dark in there but there was always good conversation.

I have no photo of the place but I saw one in a group recently and it was 100% not like I remember. There was a brick building with public toilets beside it so for some reason I remember it being brick. It was however wooden with big windows, so why it was always dark in there I don't know.

The place was more of a social hub with many more chairs than needed, as people came to just talk. The cuts where not up to the standard of Erle's, but they where acceptable.

The place closed when the new police station was built and it was ripped down to make room.

Then I was off to south hill to a place you see below (Trim Top). That place was started by a father and son although by the time I got their, the father was dead and gone. It was run by a man who was very fast at his job and it was good enough, so I went there.

Again it was a place where people talked about the weather, the farm and politics. All I can say is conservatives like barber shops. I was never in there long, even when there was 3 ahead of me I would be out in 15 minutes.

It was across the street from a restaurant and after Dad died, I'd take Mom there and walk across for a haircut. This was a win, win. I'd get a haircut and Mom would have a cup of coffee before I even got there.

There was another place that I went only 3 times. He was an odd man but a nice man. He had thousands of pennies glued to the wall of his shop in patterns and native art all over the place. He was not much for talking so I did not enjoy the place, thus only going 3 times.

Now I just take the clippers and crop it all off now and then. No need for a barber. 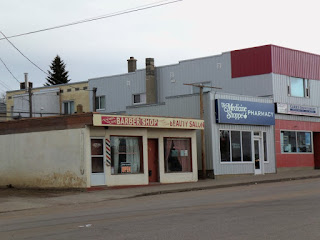