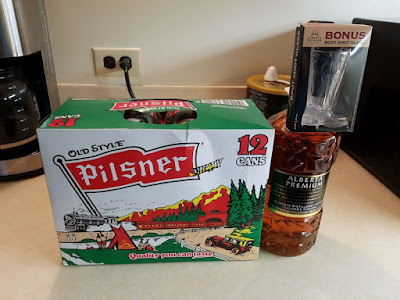 OK on Halloween I had a go at the beer and finished it. I also had a 2 OZ dram of the Whisky. Now on the 2nd of November I had a LARGE go at the Alberta Premium Whisk. I tend to go time and time again to this whisky. It's cheep, simple and tastes not too bad. It's a good I want to get buzzed off my ass drink. I mean it just tastes good for the small price of it. It came this time with a cowboy boot shaped shot glass - Alberta being Canada's Cowboy Country.

Well I have had a good and hefty pull on this bottle today. I mean I drank half of it. I'm really kind of buzzed to the point that typing this blog is a hard task. Thank God for the spell check or I would be making a lot more mistakes than I am.

What does it taste like? It's a simple and non harsh Rye whisky. I'm sure it's not 100% even though they would have you think it is. I've had actual 100% Rye and it bites like a demon. This stuff is smooth as a shaved beaver. Cough did I just say that? In any event it's at least 50% corn. I might be wrong there, but it really taste about 50% corn and about 50% Rye (maybe some wheat in there).

Pilsner Beer is that stuff day in his rather racist ways said was "an Indian beer". Don't get me wrong dad was a great man and a charitable person that literally gave 20% of what he made to the poor. But he had this thing for natives. Maybe because he was a cop or something... I don't know.

In any event I love this beer, it is not complicated. It's just beer. The strange thing is that the cans and botttles used to have 13 rabbits on them and now there is 2 of them. I got no idea why. I mean they kept the Tee Pee and what now - so why less rabbits?

One other thing I remember from being a kid and going to the liquor store with Dad that the average 12 pack was less than $10 in the 70's now in 2017 it seems it'a almost $30 for a 12 pack. You folks from the USA are going to have a kitten over that I am sure, but we have massive sin taxes up here. Smokes are also like $90 a carton up here - figure out the math on that.

It's to the point I with I was more native so I could get smokes with no taxes on them and sell them to people - oh wait that would be some kind of criminal act - never mind I did not say that LOLS. All kidding aside... For all my Dads dislike of native folks I was adopted and according to the records I am 25% native but not on the fathers side, so No "N Card" for me.

Oh well off to being drunk off my ass and watching stuff on my DVR for me - Have a good day. And don't gudge my Dad harshly - he really was a charitable person who did a LOT for disadvantaged people - it's just when he got with his Cop friends he said a lot of crappy things. It was how cops where here at the time.