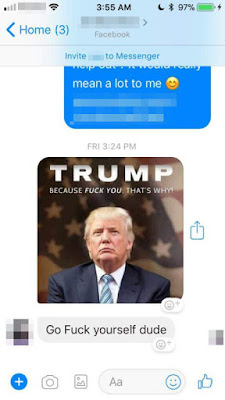 I have just ran into a perfect example of dissociation. The person who I am 100% sure would not do this to a persons face in real life goes around attacking people online like you see in this screen shot. The screen shot is from a friend who provided it.

The same person that posted this to my friend in a PM on Facebook also recently made a video ranting rather violently about several people. He said near the end of the video "you are not impenetrable, you can be found". He went on to express a desire to beat this person up and to "sexually assault you with my foot".

This is obviously something a person would not say in the real world as they would end up in front of a judge over it. The dissociation comes into play when you have the separation of the internet. Then in the mind of the person they do not realize that this is not a game and that their words can have actions in the real world.

Obviously that is uttering a threat and can end up in charges being laid against the person making the threats. There is also the very real possibility of the people being attacked contacting your boss or the low but real chance of your boss wondering into this video.

Identity is hard to keep hidden when you have a record of social media usage of your real name and you do things like post a video in your work clothing thus identifying who you work for.

This separation of online VS real world tends to make people think they can say or do anything they like to say. There is also a strange view in the minds of a lot of people that posting pictures of video of yourself doing things that can get you arrested or fired is safe.

There has been many cases of people posting live streams of themselves committing a crime. We also all know of at least one person who posted photos that they did not want in the wild and they got out.

For a lot of people these days the online world is not real and some kind of game to them. They simply do not understand that actions online carry the same effects as actions in the real world.

There have been many cases as well of people who have attacked a person to the point of suicide and then said "it was all in fun and you can't blame me for their actions". The reality that their actions caused the other person to do this never seems to set in.

Yes there is a societal element. People now seem to react stronger in their emotional response than they did 30 or 50 years ago. The combination of that and the separation of people threw social media has caused a situation where many people feel a disproportionate amount of negative stimulation.

The media tends to grab these stories and run as well, thus spreading the anxiety of trolling and the distorted reality of how often it actually happens.

Age seems to be not a factor in this as well. People tend to act in this negative and unrealistic manner no matter how old they are. In any event, this is the reality of social media these days, but for the most part it is a positive and enriching experience. We just need to focus on that part.

In closing I would also like to add that there is no such thing as privacy online. You post to friends only and those posts can be screen caped and the photos saved, then shared with others in a more public manner. So be careful and think before you post.