Freezing In A Parking Lot And Coffee 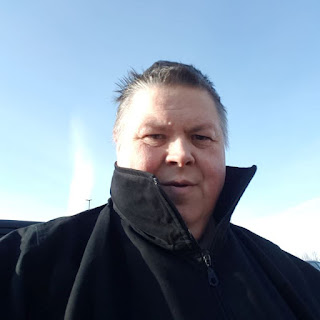 This is me in the Walmart parking lot waiting for my friends to get out of the place. I was standing there freezing to death as I lost my gloves some place and had forgotten my knit cap.

I tagged alone to get a new coffee maker. Old one packed in as as always you never know it's dead until it's filled with water. Sigh what a mess. LOL.

So I ended up spilling water all over the floor and the counter. Had to mop it up and take a bunch of paper towel to the counter. Then was the task of getting the old and rather large maker into a trash bag. Well after that random hell, I lugged it down and tossed it in the bin.

The new maker is way less fancy but does the job just as well - I just can't set it to come on in the morning when the alarm goes off. Kind of literally only did that 3 times in the 2 years I owned the thing, so I guess it is not a useful feature.

This one also takes up a lot less space than the old one. The only thing is, It's basket filters and NOT cone filters - so the old filters and lots of them are now a loss. I guess next trip out the door I will drop them off in the laundry room to let others have them. I don't need them anymore...

Back the wally world - I was going to sit on the bench in there and wait, but there where literally 7 old folk on the 2 benches and no room for me. So I had the silly idea to wait out in the cold. Well it took them 20 minutes to get out of there as they messed up and they had to get that fixed.

I had gotten to the point I was going to go back in and wait in the entry way where it was warm. So I walk in the in doors and coming out the out doors are my 2 friends. Perfect timing that.

We ended up going for coffee and a tiny bit of cheese cake. The cake was very good but gone in 3 mouth fulls. I mean it could have been 4 times the size to be a normal portion. But oh well. It was good and not over the top expensive for it's size.

Well I need to go and have a rest now, my back and legs are acting up. Better listen to them and lay down now... Later all...