So it took Shaw Help 36 hours to get back to me in a PM and I was just passed on to the chat thing. Well I could have just done chat if that's what I wanted. I'm paying for the 600Mbps internet and seem to only be getting 200Mbps. My PC is wired and it was clocking in at 580Mbps and now it won't go over 200Mbps. Kind of pissy about that. I have done all the things it says to do and don't really want to spend 2 hours on chat on my phone with them trying to get it fixed. I'd obviously have to use my phone as if I used the PC they would drop me when they went to reset the modem or what not. 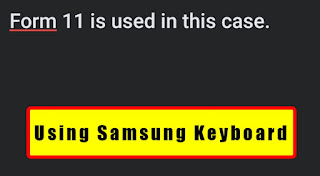 Samsung pushed out an update to my A50 and now it does not know the word "form" and several other words it used to know. The stupid thing is, in the suggestions the word comes up just as you see it above and yet it's underlined in red as misspelled. It also seems to have erased my learned words. Speaking of learned words, it used to be you long tapped the word then selected add to dictionary, now it just ads them even if you have messed up the word 20 times in a row, it just thinks it's correct and ads it after a while - to predictive text that is, not spelling. Sigh. There is literally no way to add words for spelling to the dictionary. I tried to use Gboard (Google keyboard) and it will NOT let me have the dictionary for Gboard set to the default for the life of me. Every time I plug in the phone to charge, it sets it back to the Samsung dictionary and it will NOT work with Gboard. So I'm literally forced to use their broken keyboard and dictionary (with no user dictionary).