Got a warning on Facebook for "Misleading about vaccines". I'll post the MEME that did it below for you to see how stupid that was. The reality of it is OBVIOUS. It is saying that these people say they don't want to live in fear then they act like the world is ending about a bunch of things that are good for humanity. OK 5G is not actually good for humanity, it's not harming anyone, but it's a SCAM to get you to pay way more for a phone and for data plans when you seriously do not need to be streaming in 4K on a phone when you can't tell the difference between it and 1080p - no ones eyes have the resolution to do that on such a small screen. Anyways, here the MEME. 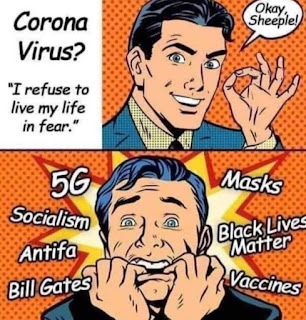 Their bots took it way out of context or the right wing snow flakes that scream "free speech" when it's something they want to express, flagged the shit out of it because they had their feelings hurt by the truth.
I appealed it. Below is one of my other appeals I sent in, you will note, it was in 2019 and is NOT resolved yet. So yeah, I'm not expecting them to get on it soon LOL. To be fair, it's hard to sit in the middle, you see both sides (left and right), screaming that the other side is being evil for saying what they perceives as true. Fact and logic is dammed on both sides and belief is reality to them. So ya know. To be honest I have friends on FB who post anti mask stuff all the fucking time and don't get dinged for it (OK almost never). So ya know. Don't give me this shit FB is left wing all the way. 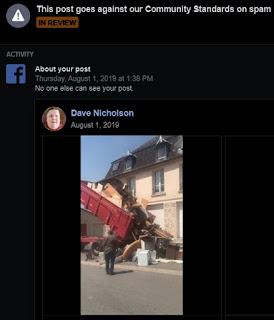 This "spam" was a post the recommended to me. It literally had "recommended for you" stamped on the top. So I shared it and "zap 14 days in Facebook jail for spam". I kind of think it's stuck in the system and will literally never be processed. Perhaps the account that posted it got banned for good and the content is literally missing now, I don't know, but seriously, it's been over a year and a half.
The only thing Facebook is, is a company desperately trying to suck money out of you threw advertising that often goes against their own terms of service. The entire time trying not to get dinged by the government for allowing "harmful content" to be posted. For some stupid reason laws in several countries now hold the owner of the platform responsible for your actions when you post something. The other thing is the idea of being sued by people why are "offended" by your post. Ya'know, suing Facebook over it.
So in all, we sit here on a platform we need to keep in contact with people we count as close as family to us, and the entire time are being beating down by bots who are more than not, wrong about the contend. Most of the "bans" I've gotten where overturned, but it took days or weeks to have it happen. The ban is often over by the time I win and it's of literally no use for me to win at that point.
Maybe it's time to see if legal action (class action) would work against them for causing distress over not being able to communicate with people you need as support to keep you mentally healthy. I'm kidding about that, but I have to wonder if anyone got a 30 day ban then harmed themselves over not being able to post on a platform that literally went out of it's way to make them addicted to posting on it.
Lets get real, they are responsible for causing people to be addicted to their product. Just as much as the cigarette industry is. They intentionally designed the AI to make you want more. It's intentional that people "need" the platform.