Twice The Fool AKA 44 Years The Fool

March 28, 2017
I've talked about this person already and his actions in my time of need. But I tried to offer my friendship once again, just in case I was wrong. He did not even have the decency to respond to me. So I sent him an email to say how I feel.

The email I just sent: "We have known each other for 44 years. I have done many things for you in this time and never asked for anything. When I was in deep need of help your greed for money outweighed our friendship and you would not help me. I was willing to even overlook this and offered the hand friendship once again. You did not even have the decency to reply to my text. I guess I was very wrong about you for a very long time. You only seem to care about you. Well I am a person who gives freely of myself and I have to say your actions have hurt me deeply twice this month. I am done. I can't keep expecting decency when there never has been any. Have a nice life."

What makes me most sad about this is when he broke up with his boyfriend (the only real relationship he ever had) I comforted him. The reality is what I said to him was all to comfort him. It was NOT the fault of his boyfriend and I knew this. It was all on him. His desire to control every aspect of the mans life and change him into what he thought his boyfriend should be.

It's always been the same. When he played in bands he was always right even when he was glaringly wrong. He thought he was top notch when in fact he was only able to play basic patterns and not jazz it up one bit. I had seem him play many times and always said "you did great" (being ever supportive), the reality being he played exactly the same basic beginners drum pattern to every song and was always lagging slightly behind.

In school the combination of him being a very small boy and his condescending attitude to most people got him in trouble a lot. Thinking he was my friend I would literally fight for him. I was bigger and stronger most of the time and when I was not I knew how to fight and would win the day. To think back I wonder how I missed the fact that he never thanked me for it - like it was expected.

I had helped him many times with his car and with his computer and many other things. Year after year this went on. The one time I needed his help he said no and told me "friends don't exploit friends". The reality of the matter is anyone who was really your friend would have helped in a heart beat and others offered when this came to light. Instead I sucked up the great pain I was in and just did it myself in anger over it all.

You have to realize as well this is a man who is 51 years old and has lived with his parents for all but 4 months of that time. The 4 months being the failed relationship part. In this time he has never paid rent to his parents, instead he has hidden how much money he has hidden away from them and gone on trips all over the place. He has been to places most people with his income only dream about it is all due to the fact he uses his parents like he uses the rest of the people he knows.

Like all users he does it with a smiling face. He gets you to do things for him then never returns the favor. Like all users if you ask him for something, he is too busy or will ask to be paid for his time. He knows me better than my family does and he know I won't ask for help unless I really need it. Here is the twist he thinks doing a simple favor for me is exploiting him when he has used everyone in his life all of his life.

People have woken up to his ways - people we where both friends with. They after said things to me like, "why do you still hang out with him, can't you see what he is doing"? I always passed it on in the name of friendship. This is the great and deep tragedy, not the fact that we are done as far as our relationship - but that I NEVER listened to the many voices of others telling me to wake the fuck up. Even after I realized full on how he was I still tried to be kind and be his friend. How stupid I feel right now.

I look at all the people he knows and it's all the same for every last one of them. It's all about him getting what he wants. He has had people do so many things for him and in return he has done nothing or only enough to keep them coming back as he needs them. Being that he has someone else for his tech help now I have been tossed aside like trash.

I am deeply sad, not for this loss of friendship - for I know it never existed - but for how blind and gullible I was for all those years. 44 years a fool and if it was not for this last indecent I would still be one.

But in the end it's how I am. I am a giver, not a taker. I will always offer my help when it's needed. I will also never expect anything back in return. 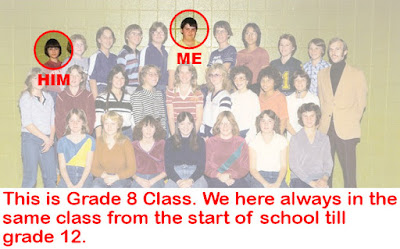